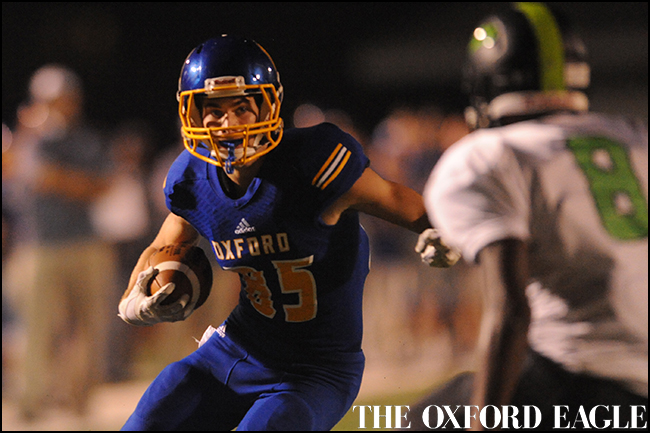 The chance at another shot starts now for Oxford.

After getting to the MHSAA Class 5A state championship game each of the last two seasons only to fall short both times, the Chargers have no shortage of motivation as they prepare give it another run. Oxford is still searching for its first-ever state title, and it’s the last time head coach Johnny Hill will lead the Chargers in their attempt before retiring at the end of the year.

But there’s a lot of time between now and when the final two teams left in each classification meet at Vaught-Hemingway Stadium on the first weekend in December to battle it out to be this year’s champion. It all becomes a moot point for Oxford should the Chargers slip up in their playoff opener against Vicksburg on Friday at Bobby Holcomb Field.

Everything else can wait.

“Our whole motive is we play them one (game) at a time,” Hill said. “You can forget about playing in the state championship if you don’t come to play Friday night. Our focus is completely on Vicksburg.”

Oxford (9-2) enters the postseason as the top seed out of Region 1-5A after finishing an unbeaten run through the region with a 30-point win over Lake Cormorant last week. Vicksburg, the No. 4 seed out of Region 2, didn’t lock up its spot in the playoffs until beating Holmes County Central last Friday.

But Hill said the Gators (6-5) are a dangerous underdog because of their speedy whole that’s greater than the sum of its parts.

No Gator running back has more than 326 yards on the ground, but Vicksburg is averaging 5.2 yards per carry. Vicksburg’s 21 points per game are usually enough for a swarming defense that’s allowing just 17 points a game.

“They’ve got a good quarterback that’s really mobile back there,” Hill said. “He’s going to give us fits. Our defense, we’ve got our work cut out. They have great speed, team speed. Might be as fast as anybody we’ve seen this year in overall speed except for maybe Starkville. We’ve just got to come out playing.”

Brown could also line up in the slot and take a handoff on a sweep or line up at quarterback to take a direct snap for an offense that, much like Oxford, likes to overload defenses with multiple looks. From the spread to a bunch formation to an empty set, the Chargers’ defense will have to be ready to defend anything from one play to the next, something Hill believes his unit will be as prepared as it can be to deal with going up against its own offense.

“It’s not like they’re going to run something entirely different that you haven’t seen,” Hill said. “They have run quads out there, and we know how we want to defense it. It could be a few things, but we should be ready. We’ve seen about everything that you can see.”

The Chargers hope they’re looking at a second-round matchup with Lake Cormorant or Germantown once it’s over.

“They don’t give you a second chance in the playoffs now,” Hill said. “You better come ready to play, and I think our kids will.”