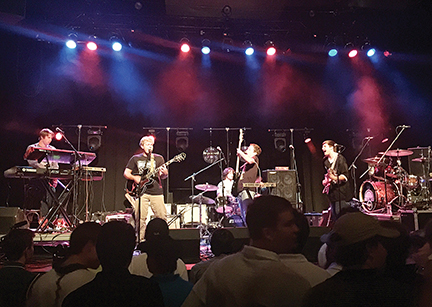 Ebenezer Goodman is starting to garner a following after forming on the Ole Miss campus.

Oxford is a unique cultural center because of the melting pot of students at the University of Mississippi. Last year, six formed a Southern alternative band known as Ebenezer Goodman.

The band’s name comes from an exit sign on Interstate-55 that many of the band members pass on their way to Oxford.

“It has a small local Mississippi vibe,” Carroll said. “And it has Avery’s last name in it. He is the heart and soul of the band.”

Carroll said the band’s first show was at a Rebelthon charity event last year. Band member John Brahan was involved with organizing Rebelthon, and he volunteered his band to play. Since then, the group has gained popularity on the Oxford music scene.

Split between different Greek organizations, Ebenezer Goodman has played at a variety of events.

“A lot of Greek organizations contact us for random events,” Shine said.

Many of the band’s members are involved in the Ole Miss community, from supplemental instruction leaders to on-campus ministries. They say it’s challenging to find a balance between school, Greek life, and band practice. Carroll said smaller gigs are sometimes used as practice for bigger events.

“We all have pretty busy schedules,” Carroll said. “We have only all practiced together once this semester. Half the band is pre-med.”

Although all the member’s schedules are challenging, they practice on their own and have small jam sessions with as few members as possible.

Being part of a band requires a time commitment, but the members of Ebenezer Goodman say it’s worth the sacrifice. Playing in front of a live audience is the ultimate reward.

“My favorite part of being in this band is when the energy of the crowd is matching our energy on stage,” Carroll said.

Avery said “the chicks” are his favorite part Ebenezer Goodman, and he enjoys it when the band stops singing and crowd continues.

Shine said their biggest show was at The Lyric opening for Moon Taxi two weeks ago.

The band is known for playing popular songs and adding their own creative twists. They have a few original pieces they have put together in their garage, but they have yet to perform an original song live.

As the band’s popularity continues to grow through word of mouth, they have begun using social media to advertise themselves and upcoming gigs.

“I fell in love with their sound and instantly started following them on Instagram to make sure I never missed a show,” she said.

The band has a unique sound because many of the members play multiple instruments and are able to interchange throughout sets.

Ball and Higginbotham are the band’s most recent additions. The two sophomore boys joined Ebenezer Goodman at the beginning of this semester. Since their introduction, their vocals have been widely accepted by fans.

“Ty [Higginbotham] is the only one who can sing like Steven Tyler,” McCrory said. “He does all their Aerosmith covers.”

Though the members are not sure where they’ll be or what will happen with the band after graduation, for now they all enjoy performing live and with each other.