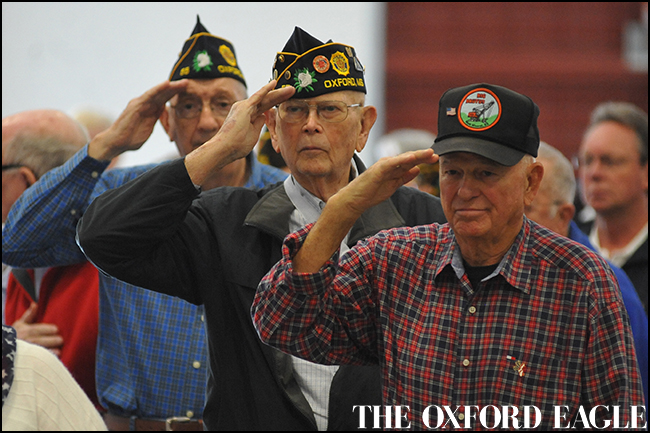 Veterans salute during a Veterans Day program at the Oxford Conference Center in Oxford, Miss. on Wednesday, November 11, 2015.

For some, the call of duty is a loud, boisterous voice inside their head from when they’re a small child. For others, like Jay Hughes, it was a mere whisper, but one he eventually decided to pay attention to.

“My path to military service was not the heralded moment of patriotism spoken about by so many others,” Hughes said during the annual Veterans Day Ceremony held at the National Guard Armory. “In fact, it was a detour — but one that ultimately got me to the right place.”

Hughes was the guest speaker at the event that was hosted by the Disabled American Veterans and sponsored by the Veterans of Foreign War and American Legion.

Current Ward 1 alderman and District 12 House Representative-elect, Hughes served in the U.S. Army for two years starting in late 1981, then served in the reserves for four years. While in service, he was in the Signal Corps as a radio-teletype operator. Hughes reminded those attending the ceremony that Veterans Day is not just to honor all who served in the armed forces in the past.

“It is also about honoring and remembering those who did not have the good fortune to come home — or those still serving in places around the world, whether in daylight or darkness,” he said. “Veterans had the fortune of coming home. Other soldiers were not so lucky.

“For me, today is a reminder that we owe a debt of gratitude, one that will never be fully repaid, to all those who have donned a uniform and swore to defend and protect the United States, its people and its Constitution.

The Oxford Police Department Color Guard posted the colors at the start of the ceremony. Elizabeth Anne Smith sang the national anthem and the Pledge of Allegiance was led by DAV Commander Jerry Bratton. Pastor Randy Hope from Abbeville Baptist Church gave the invocation and benediction.

“We thank these men and women who allowed us … through their service, to experience life, liberty and even the pursuit of happiness,” Hope prayed. “These veterans, we pass them every day and we don’t stop and notice them. But you do, Father.”

“Freedom is never more than one generation away from extinction. We didn’t pass it on to our children in the bloodstream. It must be fought for, protected and handed down for them to do the same, or one day we will spend our sunset years telling our children and our children’s children what it was once like in the United States where men were free.”