‘Mashed Potatoes and Davey’ more than a comedy 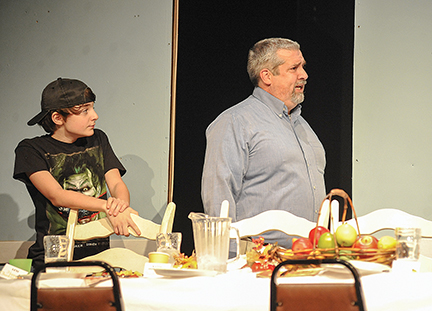 Bruce Newman Max Griffith, left, as Davey and Larry Kegley as Mr. Masterson rehearse for Theatre Oxford’s “Mashed Potatoes and Davey” on Tuesday. The Thanksgiving-themed comedy mixes laughs with some poignant truths about family and generosity of spirit.

Theatre Oxford will present Megan Orr’s “Mashed Potatoes and Davey,” a Thanksgiving-themed comedy that mixes laughs with some poignant truths about family and generosity of spirit.

The play, under the direction of Theatre Oxford veterans Bill Dabney and Jaime Adams, will be performed at the Powerhouse on Thursday through Saturday at 7 p.m. and Sunday at 2 p.m. Tickets, which are $15 for adults and $10 for seniors, students and Theatre Oxford members, can be purchased at the door or online at theatreoxford.com. The show is suitable for all audiences.

After church, the Sunday before Thanksgiving, Mr. and Mrs. Masterson invite Davey to share their Thanksgiving meal. The four Masterson kids are appalled: Davey is the biggest bully they know and has regularly made life miserable for them. Quietly, they have a meeting and decide to launch an anti-Davey campaign that will get rid of the bully for good. Rigging a bowl of mashed potatoes to fall on his head is an integral part of the plan. Add invisible dogs, turkey costumes, slingshots and Pilgrims to the mix and lots of merriment ensues.

In the end, the Masterson kids discover that Davey accepted the invitation because his parents are cold and indifferent to family occasions like Thanksgiving, which leads them to welcome him into their warm home where his instincts for bullying rapidly disappear.

According to Dabney, there were several reasons Theatre Oxford decided to do this show.

“The script is a very family-friendly, feel-good story that will be perfect for the holiday season,” Dabney said. “Additionally, as a community-theatre, we want to have shows in each of our seasons that will allow all ages to participate. This show has nine roles for children, so I’m happy to be able to give kids the opportunity to come and audition, be cast in a production and perform on stage.”

Dabney feels the show is more than just a comedy.

“Our audiences are going to have a great time at this show, but they’re also going to appreciate the message, which is that kindness and generosity are important,” Dabney said.