Morgan has lived the songs he sings 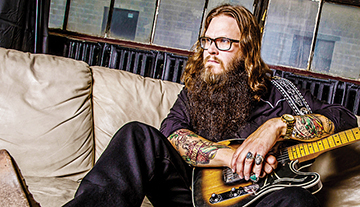 The history of country music has no shortage of characters hit by hard luck: the hard-working man who can’t seem to make ends meet, the heart-of-gold drunk who just can’t seem to put down the bottle, the woman who wants to do right but ends up, time and again, doing wrong. No matter the tragedies at the center of the songs, in most cases those characters come off like just that — characters; inventions of either a particularly gifted songwriter looking to spin a tall tale or a lazy one looking to pad out an album.

But in the case of Whitey Morgan, those characters — the drinker, the troublemaker, the struggling, hard-working man — all seem arrestingly real.

That’s largely because the stories on Sonic Ranch — a big, nasty, whiskey-slugging, bare-knuckle bruiser of a country record — are pulled from Morgan’s own back pages.

He will bring those songs to Proud Larry’s Friday night for a 9 p.m. concert.

A native of the economically depressed city of Flint, Michigan, Morgan practically bleeds straight into each of the album’s 10 songs, making for a kind of rough-and-tumble honky-tonk noir record that can pack the dance floor while doing Bukowski proud.

Credit most of the album’s fighting spirit to Morgan’s childhood in Flint. A teenager who, in his own words, “got my ass kicked on a daily basis,” Morgan witnessed the toll the city’s troubled economy took on the people closest to him.

“I experienced Flint through my parents and relatives,” he explains. “A lot of them lost jobs at General Motors, and I saw a lot of factories close and get torn down.”

Despite the turmoil, Morgan’s family was close.

“We never dwelled on the negative. My mom always had dinner on the table and my dad worked everyday for GM to make sure there was always food. They never let on that things were getting bad, ever. Growing up in Flint ignited the ‘never give up’ attitude I apply to every part of my life. That’s what you learn when you grow up in that town.”