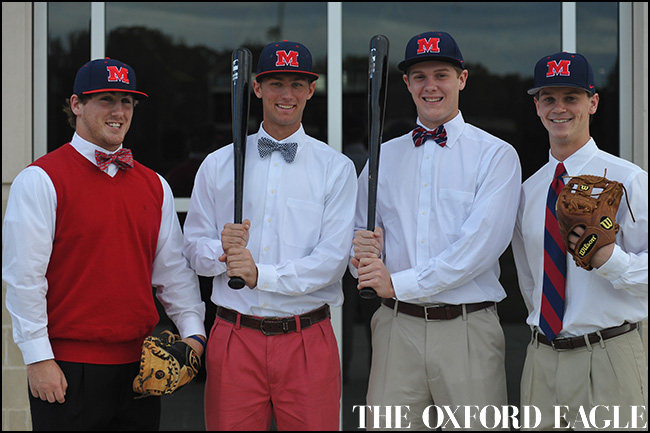 Jason Barber, Houston Roth, Grae Kessinger and Thomas Dillard signed with Ole Miss on Wednesday, keeping them as teammates for the foreseeable future.

Signing their National Letters of Intent was merely a formality for the Charger quartet as staying in Oxford has been their goal for quite some time. Now that the pen has been put to paper, the reality sets in and the hard work begins.

Barber headlines a group of seniors that will be out to defend their MHSAA Class 5A state title they won in May when their final season comes around in February. He will be trying to improve on a season where perfection, and history, was made with a 0.00 earned run average and a 12-0 record as the Chargers’ ace.

“Jason is a kid who we saw at a young age,” Ole Miss coach Mike Bianco said. “He had a tremendous freshman season at Oxford, and he’s been a great player and obviously had a tremendous season for them last year on their way to a state championship.”

Barber and Roth have been teammates since they were 8 years old and have become a dominant one-two punch for Oxford coach Chris Baughman on the mound. The goal was never to play on the same team after high school.

It just sort of fell into place.

Getting the chance to add another generation of Kessingers to the Ole Miss roster was not the initial goal for the Chargers’ shortstop, but it was not overlooked either.

“It’s really cool,” Grae said. “I’m happy that it’s where I wanted to go, and I loved it just like they did. Just the first step in a long journey that I can’t wait to see what’s in store the next three or four years.”

Dillard is the newest member of the Chargers, transferring to Oxford over the summer from Memphis’ Briarcrest Christian. He is expected to take over catching duties from Jack McClure, who graduated last season.

“It’s pretty crazy,” Dillard said. “This high school season is going to be special and the fours years to come after that. … Ole Miss offered me my freshman year, and I looked at other schools, but nothing else felt right and being in Oxford and going to school there just felt right.”

Bianco has had the opportunity to keep a close eye on three of the new signess from Oxford. His sons, Drew and Ben, are also on the Chargers’ team.

Going as a parent to watch his own sons has helped him evaluate and understand what he is getting with Barber, Kessinger and Roth more than the rest of the 16 signees Ole Miss had on Wednesday.

“Certainly it makes a lot of sense. Houston and Jason I’ve watched well before they got to high school,” Bianco said. “I’ve watched those kids grow up.”