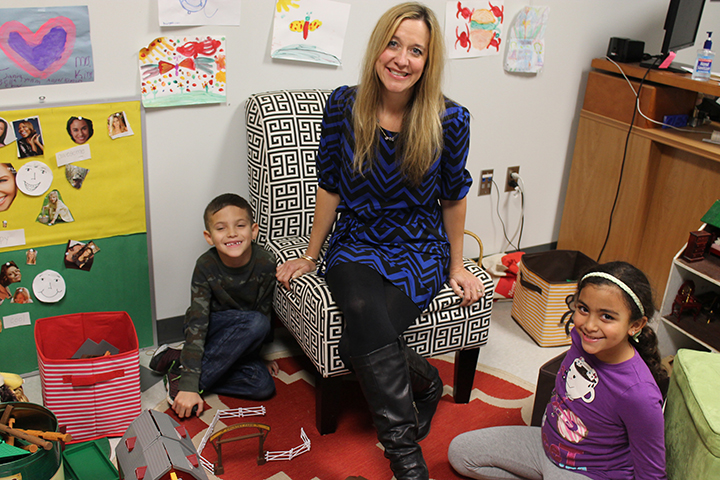 Amy King is currently in her second year as the counselor at Oxford Elementary School and has been with the Oxford School District for more than 20 years.

Upon leaving her office at any time during the school day, if there are students in the hall, they will see her and run in her direction with open arms.

After a quick hug or a heartfelt salutation, the kids go back to where they were headed and King continues with her day.

King began working for the Oxford School District in 1994 after graduating from Mississippi State University in 1993 and teaching remedial English in Sardis for a year.

She began teaching at Oxford Middle School and worked on her master’s degree in counseling at the University of Mississippi, which she finished in 1996.

Three years later, the counselor at Oxford Middle School resigned and King saw the opportunity to get the job she had always wanted. It was then that King decided to transition from teaching to being a full-time counselor.

“I had to leave my class in the middle of the school year,” King said. “It was hard. I cried. But I knew it was my chance and it was my dream. I was about to start applying for counseling jobs and I told my principal that I’d rather stay there and I asked her if I had a shot at the job. She said that I absolutely did. Then I got it.”

King stayed with Oxford Middle School until 2014 when she was transferred to Oxford Elementary. This school only caters to first and second graders and was a big transition for King, who was used to dealing with older students.

“I was really terrified when I got this job,” King said. “They asked me to move to this school and while I was really excited, I also hadn’t worked with young children in so long. But you know what? They’re all people. Little or big.”

King currently has two interns working at the school with her. One of those interns, Alana Dotson, is a graduate student getting her master’s in counseling. Dotson has previously worked at Oxford Elementary as a first grade teacher and has known King for quite some time.

“I just love her positive attitude,” Dotson said. “She’s always in it for what the kids need. She’s always looking to see what is best for the child.”

King said though many school counselors face a number of constraints preventing them from having enough time to work with students on a small group or individual basis, she always puts the kids above the paperwork.

“I might not always be 100 percent on all my deadlines, but if there is a person standing in my doorway and crying, that comes before any piece of paper. People come first. Always.”