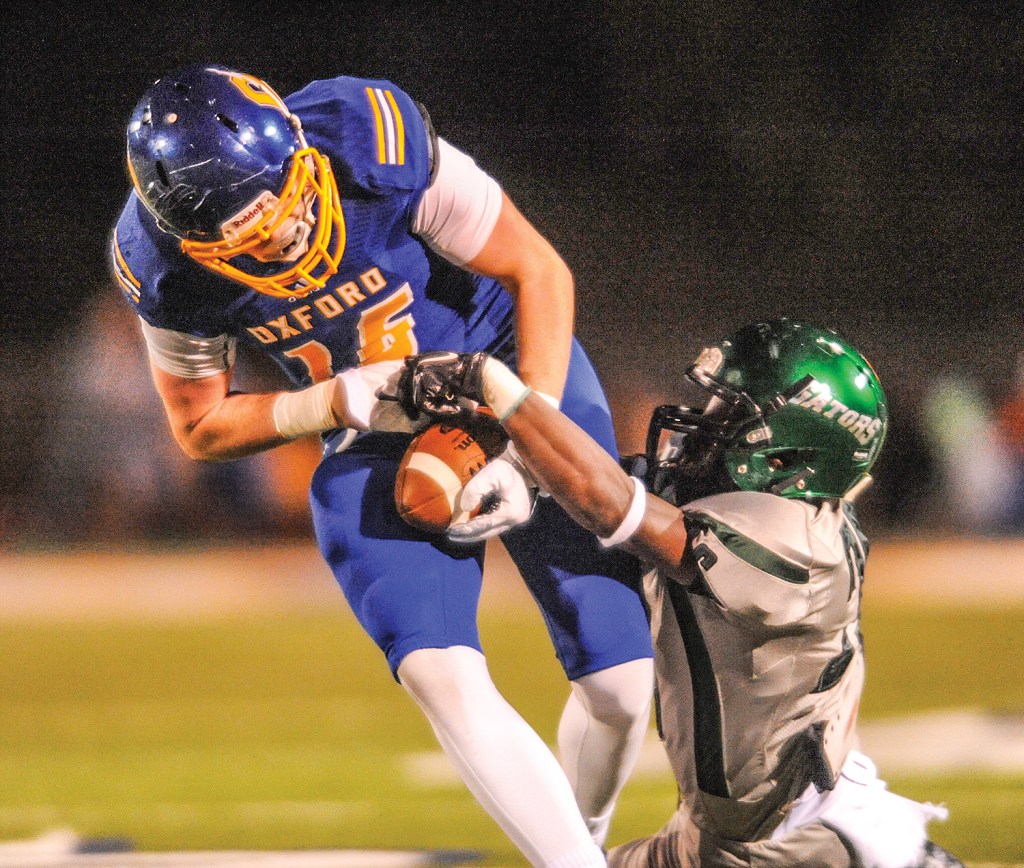 Oxford’s offense eventually did what it usually does. The question was whether the defense was going to do its part.

The Chargers came up with an emphatic answer.

Oxford withstood an initial onslaught from Vicksburg and started its quest to play in a third straight MHSAA Class 5A state title game with a 35-21 victory over the Gators in the opening round of the playoffs Friday at Bobby Holcomb Field.

The Chargers (10-2) trailed by two touchdowns early in the second quarter but scored 28 unanswered points the rest of the way to advance to host Germantown this Friday.

“They’re not gun shy,” Oxford coach Johnny Hill said of his team, which reeled off its 10th straight win. “We’ll play, and we’re going to play for four quarters.”

Oxford running back Hiram Wadlington ran for 103 of his 142 yards and both of his touchdowns in the second half, his 1-yard scamper on fourth down putting the Chargers ahead for good with 1:40 left in the third quarter. Quarterback Jack Abraham threw for 318 yards and two scores while tight end Zach Cousar, moonlighting as a tailback at times, also ran for a touchdown.

Oxford needed all of their contributions to keep up with Vicksburg’s offense, which started with the kind of speed and precision that took some getting used to for the Chargers. The Gators stretched Oxford from sideline to sideline to rip off some long gainers in the run game, and quarterback Joe Johnson took advantage of some one-on-one matchups out wide to stun the Chargers and their fans with touchdown passes to Ta’Darius Brown and Raheem Moore to put Vicksburg up 21-7 with 10:36 left in the second quarter.

“We just didn’t play or execute very well,” Hill said. “We were catching tackles instead of making tackles. They made some good plays over the top of us, but our guys never quit and fought back.”

The fight started on special teams when Oxford forced a punt on the Gators’ next possession, but Jimmy Greaser broke through to block it. Cousar was in the end zone on a 1-yard run five plays later to cut Vicksburg’s lead to 21-14.

Vicksburg (6-6) lined up to punt again two possessions later, but Greg Hayden couldn’t corral the low snap and lost control of the ball. Kent Hickinbottom pounced on the loose ball to give Oxford another short field at Vicksburg’s 28-yard line, and the Chargers cashed it in with Abraham’s 6-yard touchdown pass to D.K. Metcalf to make it a new game at the half.

“At halftime, we all talked about it as a whole team and how we were going to handle them once we got back out there in the second half,” Oxford defensive end Marcel Pegues said.

The Chargers’ defense handled everything from there.

Oxford strung out running plays and ratcheted up the pressure on Johnson, who only threw for 51 of his 205 yards in the final two quarters. Oxford linebacker Jack Turner set up Wadlington’s go-ahead score with an interception of Johnson on Vicksburg’s second possession of the third quarter, and Pegues’ strip sack of Johnson on the Gators’ next possession set up Wadlington’s 3-yard scoring run to give Oxford the two-touchdown lead with 11:03 remaining.

Johnson was sacked two times and picked off twice in the second half. Vicksburg mustered just 38 yards in the final two quarters after racking up 248 before halftime, but the Chargers don’t want to make a habit of starting slow this time of year.

“We ain’t got time to be two touchdowns down,” Pegues said. “We need to come in here playing full speed just like we did the second half in the first half. We ain’t got time for that anymore.”