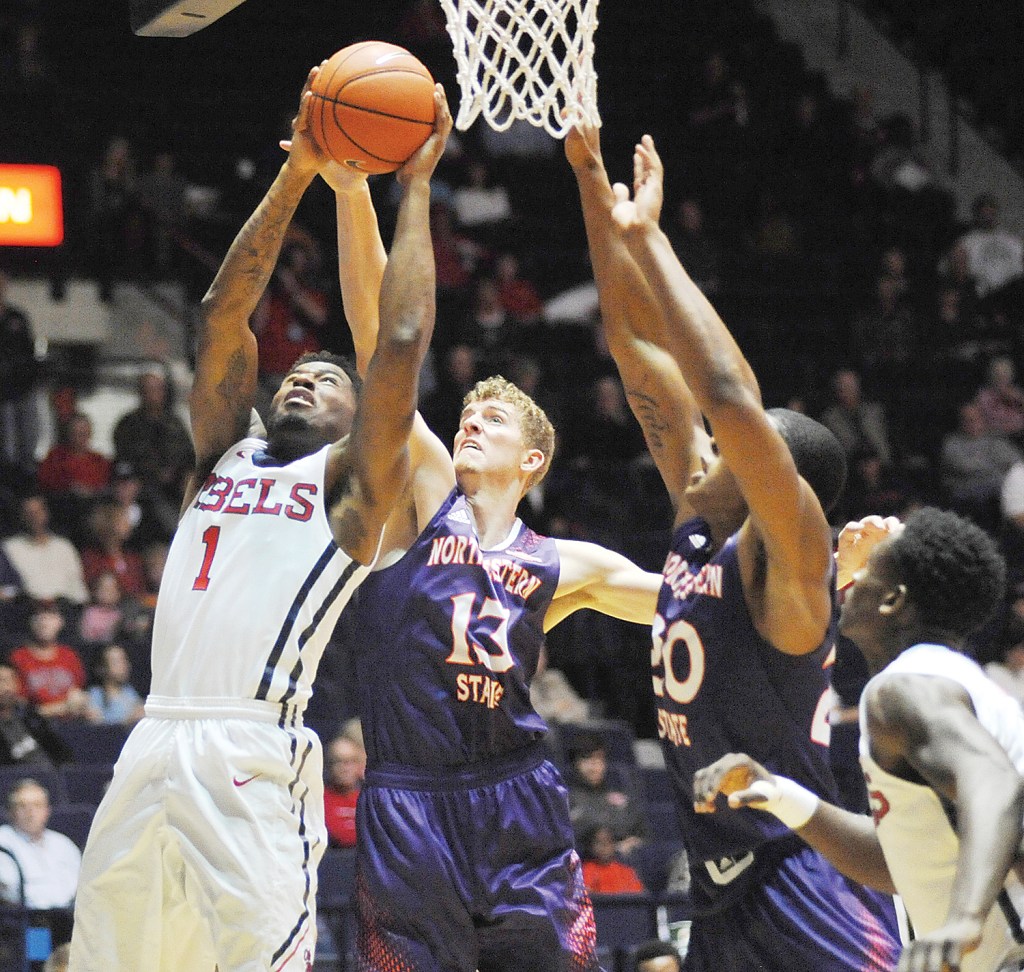 Stefan Moody tied a career-high with 29 points to lift the Rebels to a 90-76 win over Northwestern State in their season opener at C.M. “Tad” Smith Coliseum. Moody averaged 16.6 points a game a season ago and matched that alone in the second half, helping the Rebels hold off the nation’s top returning scoring backcourt down the stretch.

Sebastian Saiz added his third career double-double with 16 points and 14 rebounds. Sam Finley also had 16 points while Rasheed Brooks knocked down a trio of 3-pointers for nine of his 11 points, giving Moody the help he needed to fend off the Demons (0-1), specifically point guard Jalan West.

West got it going in the second half, scoring 24 of his 25 points in the final 20 minutes and making seven straight shots at one point. His pair of free throws drew Northwestern State within three at 58-55 midway through the second half, but a 3-point answer from Brooks ignited a 12-4 run that gave the Rebels (1-0) a 70-59 lead.

“What a player, huh? Goodness,” Ole Miss coach Andy Kennedy said. “Until I see it on the tape, I thought he made incredible shots that kind of kept them hanging around because we had a spurt where I thought we were really locked in. … I was proud of our guys though. Made free throws, rebounded the ball, didn’t turn it over, and our marquee guys played down the stretch.”

The Demons also got 22 points from Zeek Woodley, the nation’s top returning scorer, but the Rebels contained everybody else with only one other player, Ishmael Lane (13), tallying more than four points.

Northwestern State got back within single digits on a 3 from West, but Moody scored 10 of Ole Miss’ next 14 points to help the Rebels put it away. He finished 10 of 23 from the floor, attacking the Demons’ matchup zone off the bounce more often in the second half to get shots at the rim. His teammates were usually there to clean up against the smaller Demons with Saiz going 6 of 7 from the floor and sophomore Marcanvis Hymon grabbing six boards in 11 minutes.

“We have other guys that can step up and make baskets, but me being the lead guy on this team, I’ll easily take on that role,” Moody said. “A basket that needs to be gotten, I’ll step up and get it.”

Said Kennedy, “I thought in the first half he was really settling. We addressed that at half and said, ‘Listen, even though it’s a zone, it’s a matchup zone and there’s a lot of holes in it, so let’s drive the ball in those gaps.’ He did that in the second half and was able to finish some.”

The focus during the week of practice was defense after the Rebels allowed Clayton State to score 87 points and shoot better than 50 percent from the field in an exhibition victory last Thursday. Ole Miss got off to a good start with a pair of free throws being the only points for the Demons through the first 6 minutes, 20 seconds before Woodley’s jumper snapped their 0-for-13 start from the field.

The Rebels went up by as many 12 before going cold themselves, finishing the half 2 of 11 from the floor with the makes coming on back-to-back 3-pointers from Moody and Brooks to give the Rebels a 38-32 lead at the break.