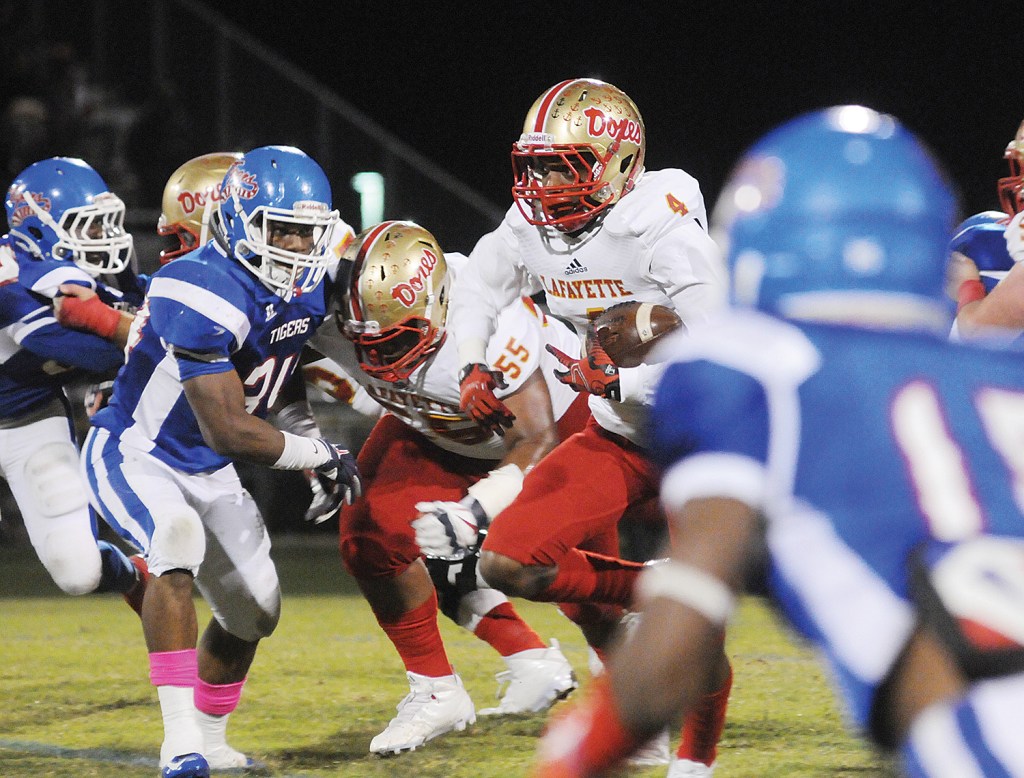 MACON — It appeared the highly anticipated meeting between Lafayette and Noxubee County was four seconds away from needing overtime to determine a winner.

A lot can happen in four seconds.

Noxubee’s Kymbotric Mason hauled in a 37-yard pass in the back corner of the end zone to beat Lafayette 20-13 in the second round of the MHSAA Class 4A playoffs Friday night in Macon.

It was a matchup between who many considered to be two of the top north Mississippi — if not the entire state — teams in 4A and possibly decided the eventual champion.

The game ended with excitement, but that couldn’t be further from the truth to describe how it started. From the first whistle, it had all the makings of a defensive struggle.

Noxubee County’s stout defense, led by one of the nation’s top defensive ends in Jeffery Simmons, stifled the Commodores’ run game and their top threat on offense in Tyrell Price.

Price struggled to get out of first gear all night, rushing for 58 yards on 26 carries, and was kept out of the end zone for the first time this season. Thirty-one of those yards came in the first half.

With Price and the run game ineffective, it fell on the arm of quarterback Will Ard to try and penetrate the goal line. He did just that, drawing first blood with a 27-yard touchdown pass to Josh Hamilton for a 6-0 lead early in the second quarter.

“It’s hard to run the football on Noxubee,” Lafayette coach Eric Robertson said. “We hit some throws, missed some throws. Overall I thought Will had a good year. I’m proud of him.”

Robbie Langley missed the extra point attempt after hitting the first try, but a holding call on Lafayette (10-3) forced him to try again. Langley had another chance to extend Lafayette’s lead, but his 27-yard field goal was blocked by Simmons late in the third quarter.

“I just felt like I could go get it,” Simmons said. “I’ve blocked a lot last year and this year, so it’s all about coming up big and making big plays. I felt like I did that.”

Noxubee County (9-4) used the momentum to march down the field and punch in a touchdown on a 1-yard run by Simmons, putting the Tigers up 7-6 with less than a minute to go in the third quarter.

“We said going in that this is a team that you can’t miss opportunities against,” Robertson said. “We left a few points out there, and it came back to get us in the end.”

Things looked dire for Lafayette when Ard had a pass picked off by Deveon Ball, who returned it for a pick-six to put the Tigers up 13-6, which seemed like an insurmountable margin with the way the game had gone to that point.

Lafayette got its offense going on the following drive, which was capped by a 6-yard pass from Ard to Tyler Williams to knot the game at 13-all with 3:04 remaining. Williams hauled it in after two Tiger defenders tipped it in the air.

The Commodores’ defense stiffened, forcing Noxubee to punt with time running out, and Lafayette used the following drive to play for overtime with the score still tied. The plan was working how Robertson wanted it with time expiring and Lafayette playing a prevent defense.

The only thing that could put a wrinkle in the strategy did with a pass getting past the defense and finding the arms of Mason for the winning score.

“We’re in prevent defense and we’ve got five DBs and we got stuck in the backfield and (Mason) got behind us,” Robertson said. “It’s unfortunate.”