ON TO THE NEXT ONE: Rebels blank Murray St. to advance in NCAA tourney 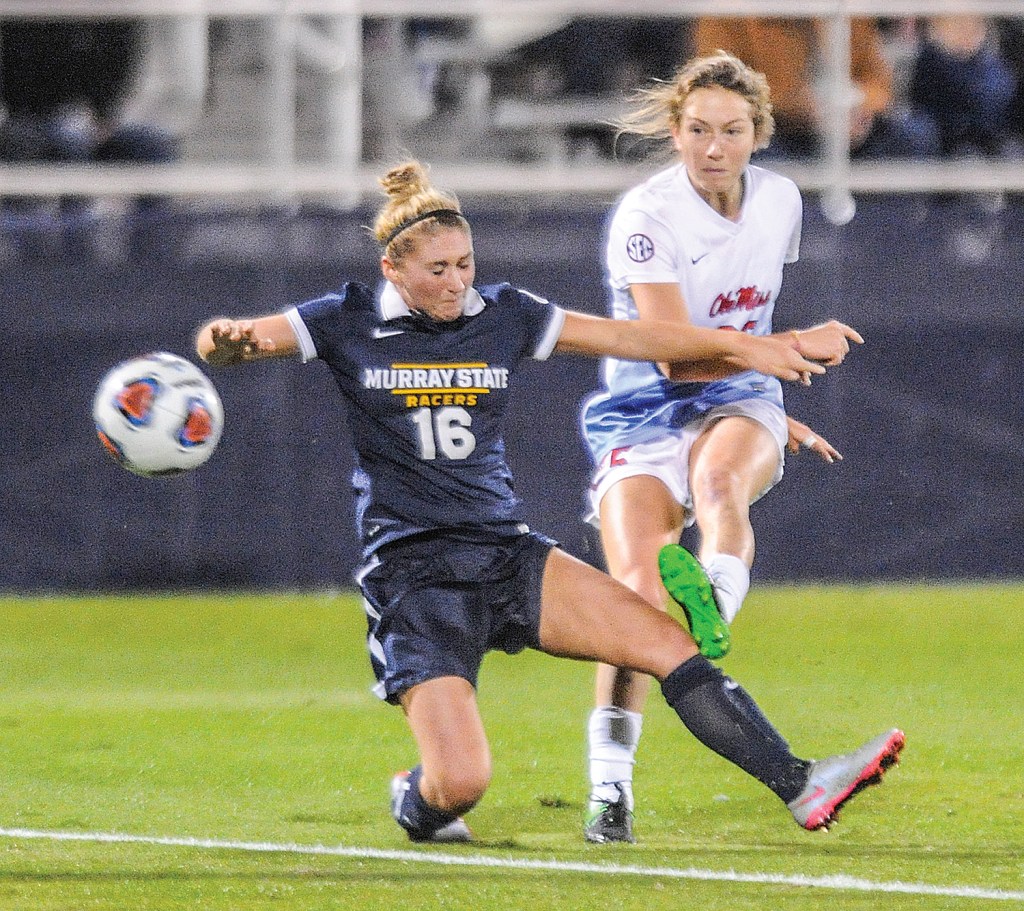 Ole Miss' Addie Forbus (25) kicks the ball past Murray State's Racheal Foxley (16) in the opening round of the NCAA Tournament at the Ole Miss Soccer Stadium, in Oxford, Miss. on Friday, November 13, 2015. Ole Miss won 1-0.

On a crisp Friday night at the Ole Miss Soccer Stadium, No. 24 Ole Miss shut out Murray State, 1-0, in the first round of the NCAA Championship.

“I am really happy to be moving on,” head coach Matthew Mott said following the win. “It is great that we scored 70 seconds in. It was a great goal by Gretchen Harknett set up by a run by Olivia Harrison down the flank, touched by Addie Forbus. It was a great finish by Harknett. I think it set the tone for us. Murray State fought like crazy and worked really hard. They connected a bunch of passes and had us on our heels a couple different times in the second half. I am really happy to be moving on, extending our season and getting to play another game.”

With the win, the Rebels (14-5-2) advance to the second round of the NCAA Tournament and will play the winner of No. 7 Clemson/Furman Friday, Nov. 20.

In a match controlled by the Ole Miss defense, goalkeeper Marnie Merritt pitched her seventh individual shutout this season and ninth overall for the club. The victory snapped the Racers’ 11-game win streak as the Rebels held the visiting squad to just four shots for one on goal.

“There is a reason Jessica Hiskey is an all-conference player,” Mott said of the defensive effort. “Hiskey was great, Liza Harbin was great. Maddie Friedmann was very, very good. Marnie Merritt was very organized behind them in the goal. I thought Melissa Capocaccia and Courtney Carroll did a good job in our holding mid-spot for us. They did a good job securing the shutout.”

The Rebels again found the net within the first five minutes for the seventh time this season off the foot of Gretchen Harknett. Just 70 seconds in, Olivia Harrison sent a cross in, with a touch by Addie Forbus that then allowed Harknett to punch it in for the score.

From there, the Ole Miss backline and Merritt did the rest, limiting Murray State to just four shots all match. Despite just one goal, the Rebels’ offense paced the match with 21 shots for 10 on goal.

Harknett finished the match with seven shots for three on goal, while CeCe Kizer added five shots for two on target. Addie Forbus took four shots in the match, while Marissa Kutchma and Harrison both recorded two.

Ole Miss will await the winner of No. 7 Clemson versus Furman, which played late last night, and play its second-round matchup Friday in a location to be determined.