Prepare for deer on roadways 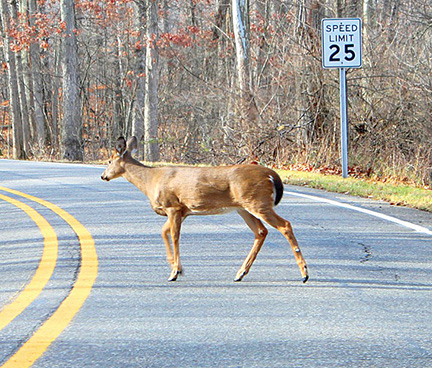 MDOT urges motorists to watch out for deer, avoid distracted driving and buckle up for safety when traveling Mississippi’s roadways.

Cooler temperatures, the rut and hunting season have all arrived, which means motorists need to use extra caution while on the roads.

Mississippi Highway Patrol Troop F’s Ray Hall said there are a couple key reasons why deer are out mixing with motorists.

“One, the vegetation begins to die in the forest and deer will tend to move to where they can find food,” Hall said. “The green grass growing on the side of most highways attracts the deer. Two, as hunting season opens, I believe the deer become more active because of the hunters in the woods. They are often spooked and run across highways and roads due to hunters.”

“Over the past five years, Mississippi has averaged 3,058 deer-related crashes per year,” she said. “The increase in vehicle-deer crashes in the fall and winter months is partially a result of higher traffic volumes, higher vehicle speed and shorter daylight hours.”

So far into November there hasn’t been a local surge in crashes reported to law enforcement, but now is the time to prepare, they say.

Oxford Police Maj. Jeff McCutchen said he does have specific statistics on car versus deer crashes, but they spike this time of year.

“In the colder months we see more crashes involving deer than any other time,” he said. “As the temperature gets colder drivers should be aware of the potential for deer.”

McCutchen said one tip he can offer is to consider taking a well-traveled and populated path home.

“What many drivers may not know is that we see as many if not more wrecks on the side streets as we do on busier roads in the city,” he said. “Many times the deer will gather or cross on roads that do not get as much traffic as compared to Jackson Avenue. They feel safer there and if drivers are not careful they can find themselves involved in a crash with the deer.”

Out in Lafayette County is another story, where roads are less traveled and more populated with deer.

Sheriff Buddy East said deputies will run into deer regularly while out patrolling.

“Now that deer season is open they started moving around more,” he said. “I went home the other evening about a mile out and there were eight up there on a bank beside the road. They can come out of nowhere.”

East said if you do wind up hitting a deer, call 911 or the sheriff’s department and help will come.

“Call us, we’ll come write up a form for insurance purposes,” he said.