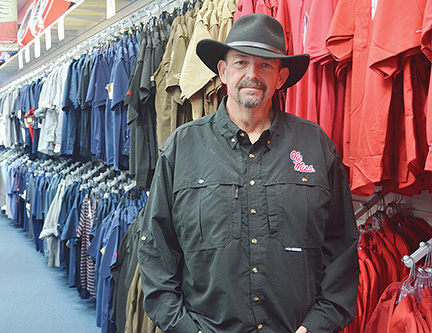 Terry Warren, owner of Rebel Rags, has been in business for a decade and is planning another expansion of the location on Jackson Avenue.

When Terry F. Warren opened Rebel Rags 10 years ago, he already had the name, the building and a strong love for the Ole Miss Rebels. Today, he has all of that and one successful business.

Warren, originally from Water Valley, grew up an Ole Miss fan even though he never attended the university.

“The effort I put in for this, I don’t think I would do somewhere else,” he said. “I think that’s what makes the store successful — because I’m so involved in the school.”

“It’s not really Terry Warren’s Rebel Rags,” Grantham said. “It’s here for the fans. We strive to have everything and not give people the opportunity to go somewhere else and shop.”

From that sentiment was born the store’s slogan, “Anything, Everything Ole Miss,” and Warren aims to fulfill it.

“We try to have a more available product, more options for that product, and that’s where we are now,” he said. “We try to grow every day.”

But adding more products to Rebel Rags’ inventory is like playing a game of Tetris.

“Right now, we’re packed,” said manager Brandi Surrette, who has been at Rebel Rags for the majority of the store’s life. “We’re packed on our space. That’s the reason I like being here — I like the atmosphere. I feel like I’m in a good place.”

Space is indeed limited — with items ranging from children’s jerseys to Ole Miss shot glasses and everything in between. Hundreds of options coat the walls and bulge from shelves. Merchandise never seems thin, but that’s not due to a lack of business. Most weekends during football season are especially lucrative, but Surrette says that if there’s a home game, things just get crazy.

“It’s like walking into Walmart on Black Friday,” she said. “You just have to stay calm and try your hardest. If it’s not just in the store, we have Internet orders like crazy. We’ll have like 30 or 40 just in the morning time. Then you have [customers] coming in all through the day — especially if we win.”

Surrette said Rebel Rags requires all hands on deck for game day (which is about 25 employees), and the following Monday is a restocking frenzy.

“It’s crazy how much stuff we go through just in one weekend,” she said.

But, in order to stay true to its slogan, constant buying is key.

In order to do so, Warren is planning on adding 7,000 more square feet to his store by June 2016. He said there will be two entrances — the existing one as well as one in the back of the building, 100 parking spaces and many more registers.

In light of the impending expansion, Grantham, who jokingly claims that Rebel Rags was her first child, enjoys reflecting on the past 10 years.

“It’s been kind of a dream come true,” she said. “To look back and see how successful Ole Miss has been and to see Rebel Rags grow and do as much as we’ve done since we opened.”

Her father again credits the fans.

“Whenever you’ve got something on that says ‘Ole Miss’ or ‘Rebels,’ then you are promoting your community, your school and you’re letting them know where you stand,” he said. “We’re not the biggest fan base by any means — with Texas A&M or Alabama — but they’re loyal to the Rebels, and they buy gift items and clothes and they wear them, and that’s what makes us successful — because they support their team.”