COMING UP SHORT: Rebels’ late rally fizzles out in loss to UL-Lafayette 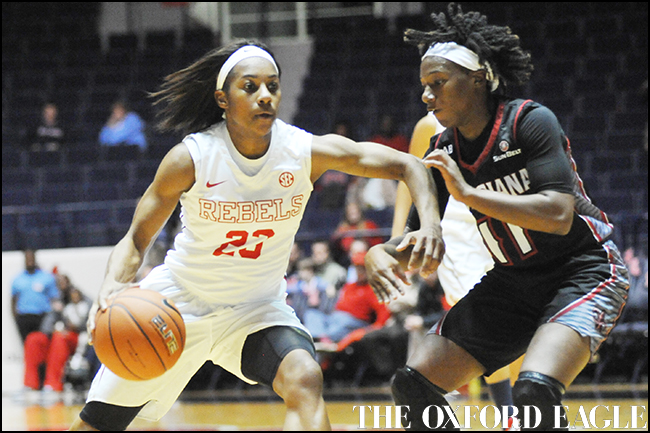 And the Rebels’ freshman sharpshooter at least made things interesting Sunday night.

Lewis did what she could to help Ole Miss turn a blowout into a game in the final minutes against Louisiana-Lafayette, but the Rebels ran out of time, falling 82-78 at C.M. “Tad” Smith Coliseum.

Lewis came off the bench in the second half to drain six 3-pointers and help balance what head coach Matt Insell called a “sobering” defensive effort from his team. Lewis scored a team-high 20 points in 14 minutes with her final triple getting the Rebels (1-1) within four with 25 seconds left after trailing by as many as 23, and Mudinah Muhammad followed with a trey to get Ole Miss within 80-78 with 9 ticks remaining.

But Jordan Alexander knocked down a pair of free throws for UL-Lafayette (1-0) to put it out of reach, sending the Rebels to their first loss in a physical game that saw seven players foul out.

Muhammad finished with 14 points, Shandricka Sessom had 12 points and seven rebounds, and Bretta Hart collected nine points and a game-high 19 rebounds, the most for an Ole Miss player since Armintie Price pulled down 20 against Mississippi State on Jan. 26, 2006.

After playing just four minutes in Ole Miss’ opening win over Mississippi Valley State on Friday, Lewis paced an offense that knocked down 10 triples in the final two quarters after connecting on just 3 of its first 15 shots from beyond the arc.

“I think coach wanted me to be ready,” said Lewis, a native of Olive Branch. “I was just actually ready to shoot. I think that’s what coach wanted, so I was ready to go.”

But the Rebels struggled to stay at a consistent pace with a UL-Lafayette team that won 23 games a season ago and claimed the Women’s Basketball Invitational Tournament championship. Point guard Jaylyn Gordon poured in a game-high 29 points for UL-Lafayette, which often broke down the Rebels’ defense with dribble penetration from Gordon and fellow guard Keke Veal (18 points, four assists) to grab a quick double-digit lead and stretch the advantage to 46-26 at the half.

“I knew watching them on tape if we came out and didn’t play with energy in the first half or the second half or whatever it was that they were going to be tough for us to defend,” Insell said. “We got out there reaching and fouling and got in foul trouble. That’s our own fault. That’s 100 percent our own fault.”

Ole Miss will return to Tad Smith Coliseum on Thursday to take on Missouri State at 6 p.m.