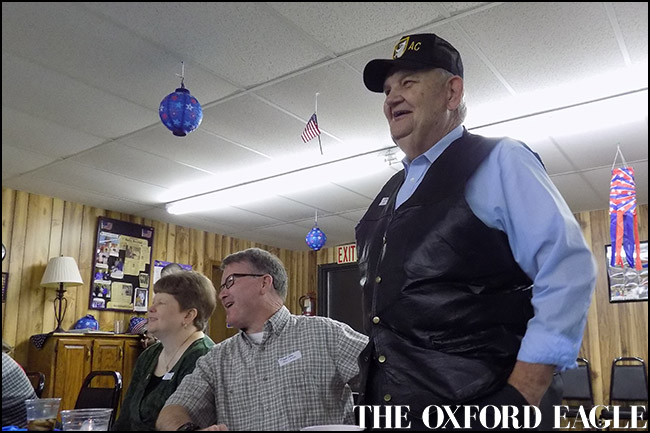 Buford Babb, right, speaks during a National Guard reunion at the Veterans Building in Oxford, Miss. on Saturday, November 14, 2015.

Members of the Oxford unit of the Mississippi National Guard attended a reunion Saturday night for no particular reason. It wasn’t an anniversary of some kind. It wasn’t a holiday. It was just a time for brothers in arms to get together, share a meal and a few memories.

Like many veterans, James “Jim” Cooke wears many hats now from author to historian to professor and even a retired brigadier general. However, the one he’s partial to is brother.

“A colleague of mine, Stephen Ambrose, wrote a book, ‘Band of Brothers,’” Cooke said while eating peach cobbler at the reunion. “It’s hard to explain what takes place. It’s a shared experience. Not opened to Civilians. When you come in and are called to combat it doesn’t matter where you are from, what you have done. Someone with a PhD will find his closest friend is someone with a high school education. Once you crossed that line, you became a band of brothers.”

Mark Stone served in the National Guard from 1996 to 2002 as a loader and driver for the Oxford unit and ended his career as a staff sergeant. He and retired Staff Sgt. Mike Vanderlip organized the reunion.

“We just wanted to have an event where some of the new guys could meet some of the old guys,” Stone said. “We’re all so busy and don’t get a chance to just to sit and catch up often. We get to see if everyone is doing OK or if anyone needs some help.”

Buford Babb, 80, served in the National Guard for 41 years.

“I married my wife and I married the National Guard in 1953 and I still got them both,” Babb said. “I love the Guard. I came with the old armory in Oxford and now they’ve torn it down so I’m getting worried.”

The soldiers, both active and retired, shared stories of times spent during training, and times spent overseas.

Some stories were funny, while others reminded everyone why they were in Iraq wearing camouflage.

Sgt. 1st Class Keith Wooten and Capt. Jesse Hill came to the reunion in their uniforms. The two came from Camp McCain south of Grenada after learning of the reunion. Wooten has done two tours in Bosnia and two tours in Iraq.