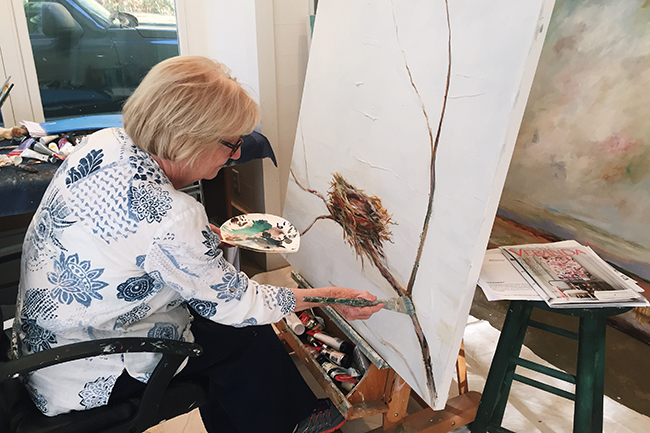 Submitted Local artist Lois Arrechea works in her studio, painting an outdoor scene. The Arkansas native has been in Oxford since 1974.

Local artist Lois Arrechea uses her love for Southern landscapes and nature to paint original pieces, both traditional and abstract.

“I’m a nature girl at heart,” Arrechea said. “I like to walk in the woods and along the back roads to find my inspiration. I’m really interested in colors, and I like seeing what I can do with them.”

Arrechea said clients are drawn to her use of soft, calming colors. She favors light blues and whites because of their soothing effect, but will sometimes switch it up with a darker color.

“I’ve been painting ever since I was a little girl,” Arrechea said. “I grew up watching my grandma make quilts. She was an artist of her own. She’s what really sparked my interest in art.”

“I knew the minute I stepped into Oxford I was in the right place to paint,” Arrechea said. “The atmosphere and the people just felt right to me. It’s much different now, but it’s still home.”

Arrechea’s career was teaching, but her passion is painting. When her children graduated high school, she had more free time and gained more confidence in her artistic ability.

Now, she spends about five hours a day painting in her studio. She plays music as part of her daily routine. It helps her get in the artistic zone.

“The first thing I do is turn on my music and play it as loud as I can,” Arrechea said. “I like listening to Billy Joel, but when I want something more relaxing, I put on Beethoven.”

When traveling, Arrechea takes pictures of landscapes to bring back to her studio. The Delta is her favorite place to visit because of its beauty and proximity to Oxford. She has tried to paint on site, but said it’s too open for her to concentrate.

“I also get models for some of my pieces,” Arrechea said. “For example, in order to create my bird nest paintings, I brought in a couple of real nests to help grasp the details.”

The bird nest paintings are her favorites, because they always turn out best.

Arrechea said it takes one to two days to finish a piece.

“It’s good to get other people’s eyes on it too,” Arrechea said. “Although my husband is color blind…so he can’t help me much. I’ll ask him what color he thinks something is, and he will respond with a completely different color. It’s pretty funny actually.”

Arrechea works on two pieces at a time so that she doesn’t over-paint.  She said spending too much time on one piece usually ruins it.

“It’s a process of looking, doing and feeling,” Arrechea said. “Sometimes it takes several layers to get the right color, and even then, you never really know when a piece is finished. It’s just kind of a gut feeling.”

Arrechea stays busy with her galleries and hasn’t found it difficult to promote her work. Her paintings can be found in three galleries in Memphis, and one in Atlanta and Huntsville.

She said the best part of painting is being able see how different colors turn out once on canvas.

“When I’m not happy with a piece, I go over it,” Arrechea said. “I actually like to do that a lot. It gives a canvas more depth after you go back over the scene.”

Arrechea said she does not typically do commission painting because it is hard for a person to relate what they have in their minds to an artist.

“People just get so caught up on a specific idea,” Arrechea said. “It’s too difficult for me to create exactly what they are thinking. I’d rather just paint whatever pops into my head.”

Arrechea has participated in Double Decker for 15 years with her two daughters. She said her daughters watched her paint for years before they tried it themselves.

Because they have different styles and color choices, they never paint together. Arrechea said artists’ methods vary, and it is sometimes hard to find those with similar tastes.

“I started out using oil paint when I was studying at Arkansas,” Arrechea said. “When I started studying at Ole Miss, I got into acrylic. It took quite an adjustment, but acrylic works best for me. Oil takes much too long to dry. I use a lot of light colors, so I really don’t like to wait for those to dry.”

Artist and teacher, Rachelle Wells, said oil is her favorite paint to work with despite the fact it takes longest to dry.

“Even though painting with a very slow-drying paint seems more difficult, I prefer to be able to change small details after a couple of days,” Wells said. “That’s what’s so special about art. Art isn’t permanent. Art isn’t constant. It’s always changing.”

Wells believes art is an expression of the soul and that nothing is more unpredictable than the human mind.

“Different ideas will appear in my head,” Wells said. “I find comfort in knowing my art is always customizable to how I feel.”

Although Wells and Arrechea prefer different mediums, they can agree on one thing: painting can be used as an escape.

“I get lost whenever I paint,” Arrechea said. “I don’t know anything else going on. I just let my mind go and see what happens.”