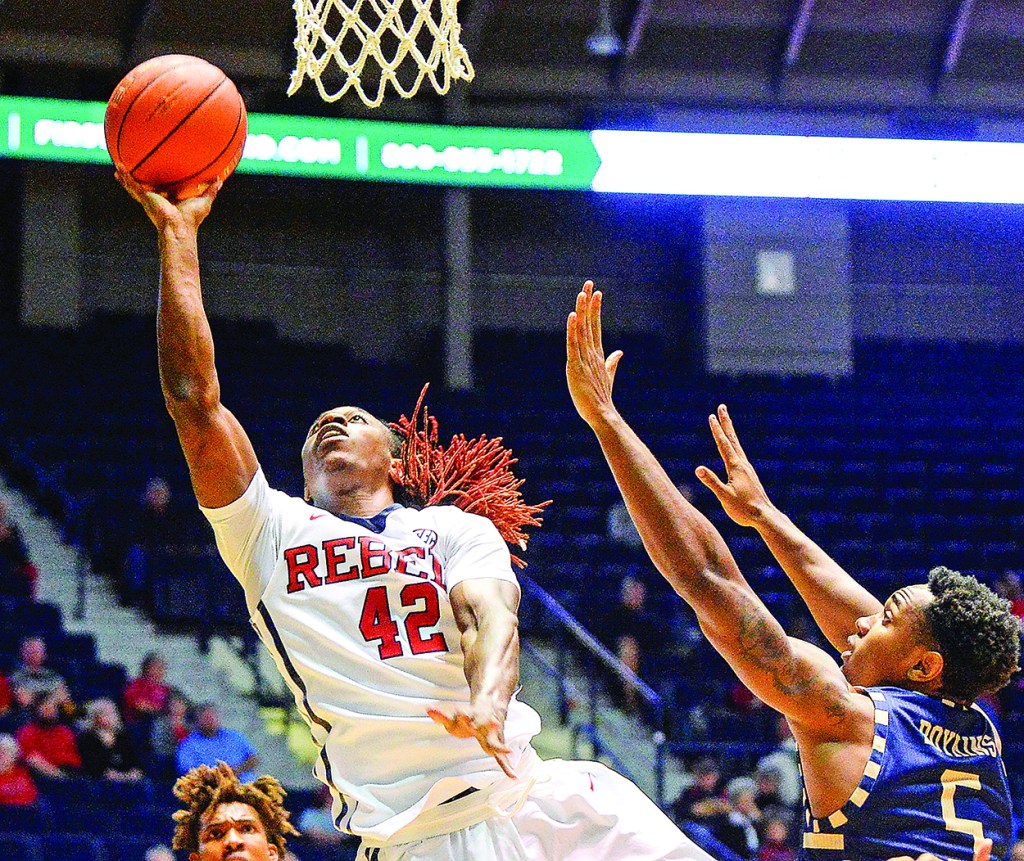 Ole Miss men’s basketball coach Andy Kennedy said in the preseason his team needed Sebastian Saiz to perform like an all-league player to be a factor again in the Southeastern Conference.
The Rebels’ big man is off to a good start.

Saiz had career-highs in points and rebounds Monday in Ole Miss’ 82-72 win over Georgia Southern at C.M. “Tad” Smith Coliseum. Stefan Moody added 22 points and eight boards for the Rebels (2-0) while Sam Finley chipped in 12 points, but the Rebels took advantage of Saiz’s size against the smaller Eagles to work the ball into him from the start.

After posting 16 points and 14 boards in the Rebels’ opening win over Northwestern State on Friday, Saiz finished with 24 points and a game-high 17 rebounds, matching his double-double total in his first two years combined through the first two games this season. He was bigger than every post player the Eagles had and got even more advantageous matchups with Georgia Southern switching all screens, leaving guards on the junior forward at times.

“I want him to demand it more,” Kennedy said. “He’s gotten to where he can post to his size. He’s a big-framed kid. He’s 6-foot-9, 240-some odd pounds. So we’re just trying to get it to him where he can play to his strength. Wide base, play over the top of people and I thought we did a really good job early in that.”

Saiz finished 8 of 14 from the field and made eight of his 11 free throws. Ole Miss attempted 53 free throws in all, just two off the single-game school record of 55 attempts in 1980, and made 40 of them.

“They were a small team,” Saiz said. “All their guards were like around 6-0. We just took advantage of it.”

With the graduation of Aaron Jones and M.J. Rhett off last year’s team as well as Dwight Coleby’s transfer, a thin frontline is counting on more production from Saiz, who averaged just 7.6 points and 5.5 rebounds last season. The competition will get tougher starting with the Charleston Classic this weekend in Charleston, South Carolina, where the Rebels will meet George Mason on Thursday and possibly Oklahoma State and No. 6 Virginia later in the tournament, but it’s an opportunity Saiz has been waiting for.

Even with Saiz’s contribution, the Rebels had trouble putting the Eagles away, shooting just 36 percent from the field and 14 percent (2 of 14) from 3-point range. Georgia Southern’s only lead came less than two minutes in, but a 7-0 run midway through the second half cut the Rebels’ lead to 59-56.

Ole Miss answered with a 7-0 run of its own, all of the points coming from the free-throw line. Three straight freebies from Saiz pushed the Rebels’ lead to 66-56 with 5:37 left, and the Eagles never got any closer than five the rest of the way.

“(The Charleston Classic) is where I want to see if we can get some carryover and play to our strength, which is obviously to trying to get Moody angles, and we’re going to play through Sebas inside because he’s been beneficial,” Kennedy said.

COMING UP SHORT: Rebels’ late rally fizzles out in…