Chargers hold off Hernando for sweep 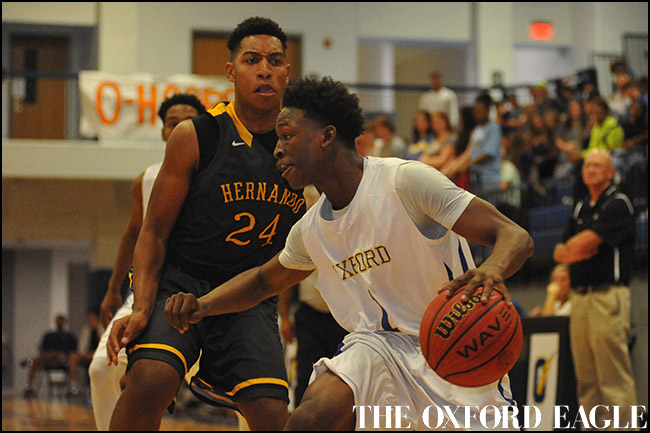 It was the third game of the season, and Oxford boys basketball coach Drew Tyler wanted to try and get some of his inexperienced players minutes.

Hernando decided to change that plan.

The Chargers faced a pesky Tiger team that rallied multiple times before Oxford escaped with a 71-68 win at the OHS gym Tuesday night.

“Hernando had games under their belt and had big guys that were mobile,” Tyler said. “They were agile and they made us move. They made our long bodies move in the full-court set and especially in the paint, and it gave us trouble and got us in foul trouble.”

Oxford (3-0) relied heavily on the play of seniors Jarkel Joiner and Christopher Sandroni, who combined for 47 points.

Joiner had his second-consecutive game with at least 30 points while Sandroni contributed 17 points. He was 5 of 7 from behind the 3-point line.

The duo has gelled the first three games, and while the season is still very young, Tyler likes what he is seeing out of his two guards.

“I really think Joiner and Sandroni are really playing well together,” Tyler said. “The opponent is not going to be able to guard Jarkel one-on-one. He can beat a press and he can set your offense up, but he’s bringing a second body with him. He’s making people help, and it’s leaving Sandroni open. Sandroni’s taking good shots, he’s making good decisions and he’s knocking them down. If the other team is scoring too, there’s a good chance if Sandroni is scoring, it’s going to be a 3. It does a lot for us.”

After Hernando (2-2) managed to tie the game at 59-59 with 5:02 left in the game, Joiner and Sandroni put the Chargers on their back, leading a 10-2 run over a span of three and a half minutes to help seal the win.

Oxford hit big shot after shot throughout the contest, but the Tigers’ transition game kept frustrating the Chargers, leaving wide-open layups at the other end of the court constantly.
Hernando junior Eli Powell was the biggest thorn in Oxford’s side, scoring a team-high 27 points with most of them coming inside the paint.

“It’s almost like special teams in football and they were beating us down the court,” Tyler said. “They were beating our big guys down the court, therefore they had long outlets and we were out of position. They also had a lot of old-fashion three-point plays, and that really hurt. We gave up points in bunches, and that’s like playing Russian roulette. We’ve got to buckle up and get some stops.”

Lady Chargers tame Tigers
Things started off slow, but the Oxford girls basketball team found its stride, pulling away for a 66-42 win over Hernando.

The Chargers (3-0) have developed a rhythm in the early part of the season that new head coach Cliff Orman would like to see change as the year goes on.

“Well I thought again in the first quarter we operated pretty well the first two or three minutes of every game, but as the half went on, we kind of tended to play the way the game’s been and not to our tempo that we try to preach in practice,” Ormon said.

It is still a feeling-out process on both sides for coach and team, but after three games, both are starting to understand the other. After recording 28 fouls in its first game, Oxford was called for 13 fouls two games later.

“I do believe the girls know what we’re wanting,” Ormon said. “They’re going to continue getting better. We’re learning to move our feet a little bit. Different competition has brought a little bit different wrinkle to the way we have to play. I really like our team and the way that they’re buying in.”

One aspect the Chargers had trouble with was finishing the close-range shots. Multiple layups and high-percentage shots hit the rim or missed the basket all together, which could have provided a little more breathing room for Oxford. The upside is that Ormon likes the aggressiveness and seeing all the scoring opportunities his team is earning.

“I’m proud we’re getting to those spots,” Ormon said. “I think some of the girls, some of them are new in their spots and not expecting to get the ball there. … You want to see those go in. I wasn’t expecting us to miss as many as we did.”

Guard Tiara King scored five points but left the game early after suffering an inadvertent elbow from teammate Jordan Freeze when the two both went for a rebound.
Ormon felt she could have returned but kept her out for precautionary reasons with the game in hand at the time.