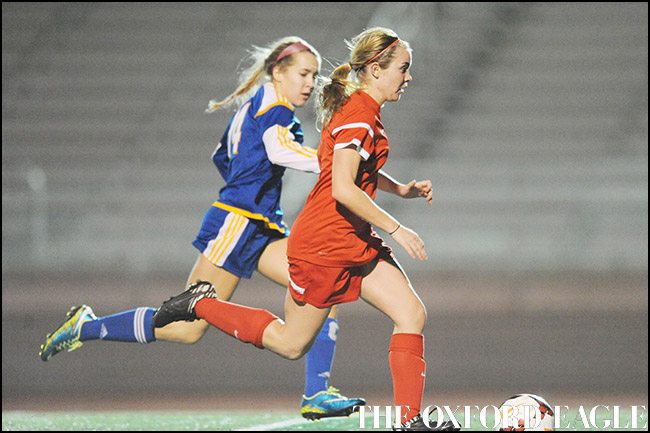 Oxford and Lafayette went back and forth at each other for nearly all 80 minutes, but one particular player got loose a couple of times.

It happened to be the best player on the field.

Senior forward Alley Houghton was taken down in the penalty box in the final minutes of Tuesday’s match at William L. Buford Stadium and made the penalty kick to lift Lafayette to a 2-1 win over the rival Chargers. Houghton, the state’s reigning Gatorade Player of the Year who’s committed to Ole Miss, scored both of the Commodores’ goals to help Lafayette improve to 2-0.

“That was perfect timing for us,” Lafayette coach Melinda Scruggs said. “We needed to get (a goal). It’s hard with this wind tonight to be able to get the ball on that side of the field.”

Houghton got behind the Chargers’ back line less than four minutes in to put her first shot in the back of the net, giving Lafayette the early advantage. But defense as well as the elements took over from there.

The teams played the match just before heavy rain moved into the area with each team playing a half with wind swirling at its respective back, which helped speed them up for 40 minutes and slow them down the rest of the time. Oxford (1-1) controlled possession in the second half and drew even when Madisyn Longnecker got past Lafayette keeper Ana Branch and found the back of the net 11 minutes into the second half.

The Chargers appeared to take the lead a few minutes later when another shot glanced off Branch’s hands, caromed off the crossbar and into the net, but referees ruled the ball first hit the football crossbar right above the goal off the ricochet and waved it off.

“The law of physics, I’m not real sure how (the ball) did what it did,” Crane said of the nullified goal. “But it did, and that was the call.”

Lafayette worked the ball into the Chargers’ half late and eventually to Houghton, who sprinted toward the end line then cut inside before being taken down from behind in the box with 7:30 left. Houghton tucked her penalty kick in the bottom left-hand corner of the goal to put the Commodores ahead for good, giving her six goals through Lafayette’s first two matches.

“Both teams were able to capitalize with the wind, us in the first half and them in the second half,” Scruggs said. “And then just being able to get a call in the box was kind of the different-maker.”
Said Crane, “We just lost track of (Houghton) a couple times, and that was the difference in the game.”