NEXT STEP: North Half berth on the line for Chargers, Mavs 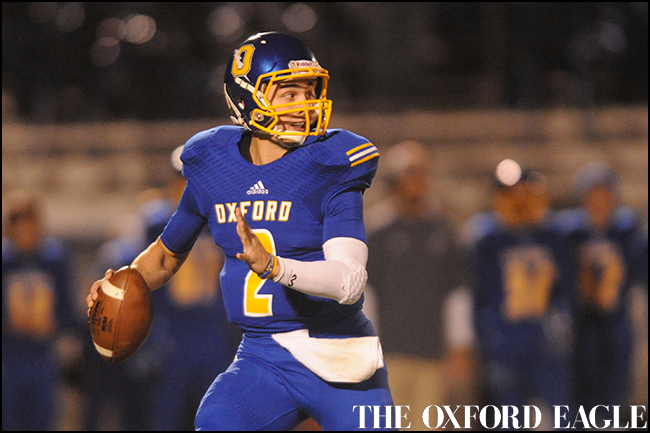 Last week, Oxford got off to a slow start against Vicksburg in the opening round of the MHSAA Class 5A playoffs. The Chargers were able to right the ship in the second half to survive and advance.

If they want to stick around for a third week and play for a third consecutive North Half title, they will have to play a full four quarters against a potent Germantown team.

Oxford (10-2) hosts Germantown (9-3) in the second round Friday night for what will be the first-ever meeting between the two schools on the gridiron.

The winner will earn the right to play in the North Half championship game next week against either West Point or Grenada.

The Mavericks come into the game riding a six-game winning streak, beating Lake Cormorant 27-7 in the first round. It is a game with mirroring styles on offense as both the Chargers and Germantown like to put up points, a lot of points.

Averaging 37.8 points per game and putting up 72 and 62 points in two games this season, Germantown is a team that can keep up with Oxford’s video game-like offense on any day of the week, giving a strong possibility of a shootout taking place at Bobby Holcomb Field come Friday night.

“They are a really, really good football team,” Oxford coach Johnny Hill. “They are very sound. Just a well-coached football team that plays hard. They try to get the numbers on you. … Team speed, probably faster than anybody we’ve played this year. I know (Germantown coach) Tim Shramek from way back, and he just does a real thorough job on special teams, defense and offense. It’s going to be a battle.”

It is a balanced attack for Germantown with senior quarterback Michael Allen leading the Mavericks. Allen has completed 91 of 166 pass attempts for 1,514 yards, 15 touchdowns and six interceptions. He spreads the ball around as the Mavericks have two receivers with more than 300 yards in seniors Chander Dillard (664, seven touchdowns) and Joshua McCullum (363). Taury Dixon is close to adding his name to that list with 289 yards receiving and four touchdowns.

Running options
The ground game is three-fold with power, counter trey and the Veer all having success against opposing defenses. Through 12 games, the Mavericks are averaging 236.6 rushing yards per game with senior Dalton Bradfield carrying most of the load. Bradfield has 1,304 yards and 20 touchdowns on 210 carries for more than six yards per carry.

“They run it and run it well, and it kind of gives you three phases there on just running alone that can hurt you,” Hill said. “You don’t care who’s got the ball, you just hit that inside back. If (we) do that, then we’ll be fine. If they don’t, then that fullback’s going to be running for days.”

The point of attack and completing the tackle all the way to the ground was an issue the Charger defense had last week against Vicksburg in the first half before wearing down the Gator offense.

The margin for error grows slimmer each week as the playoff season gets deeper and deeper.

“I thought we came out a little flat, and it was like a tale of two teams,” Hill said of last week’s game. “We started attacking rather than catching, and that’s been a problem of ours of catching people early and playing cautious. When you catch people, they’re going to move the football and we’re going to have to attack a little bit more than what we’ve been doing.”