OHS to get OUT bus next fall 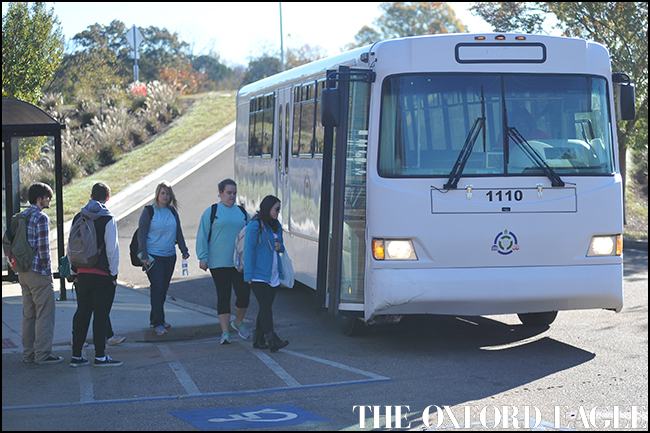 The Oxford-University Transit line is adding a handful of new routes over the next 12 months including one that will lead to Oxford High School and a late-night route that will take students from the Square back to campus.

OHS Assistant Principal Duncan Gray approached the OUT commission a few months ago asking for a new route to go out to the school.

“After school lets out at 3:50 (p.m.) many students are reliant on the bus to get home so that limits them from participating in afterschool activities,” he said.

The new route will run from 8 a.m. to 5 p.m. Monday through Friday only when school is in session during the year. The route will cost about $25,000 a year to operate. To help offset those costs, Gray came up with an alternative funding method.

Currently, people can park at the high school on game day weekends for $5 round-trip and be shuttled to campus and back. Gray has suggested raising that to $10 with the extra $5 going toward funding the new bus route.

“They said they were running out of colors to name the route, so I said, ‘How about gray?’ he said with a chuckle.

And so it was named the Gray Line.

The new route, if approved by the Oxford Board of Aldermen, will not begin until the next fiscal year, which begins Oct. 1, 2016.

The Gray Line will go from the Square, down Jefferson Avenue to Bramlett Boulevard to Sisk Avenue, across the Highway 7 underpass and end at OHS. Schedule stops and times have not yet been established.

A late-night bus is also being proposed that will run 10 p.m. to 2 a.m. Thursday and Friday and 9 p.m. to 1 a.m. on Saturdays during the school year that will run from the Square to the University of Mississippi campus.

Tim Akers, with McDonald Transit that manages the OUT system, said that bus line could begin in January. The cost would be about $30,000 a year and the city and university would share the cost until October. After Oct. 1, the route would fall under the Mississippi Department of Transportation grant given each year to run the OUT system which pays for 80 percent of operational costs. The city and university would then split the 20 percent matching share.

“This is a safety issue and we’re going to support it and the university supports it,” said Mayor Pat Patterson. “We’ll run it for a while and get some feedback and see how it goes, then go from there.”

A security guard will be on the late-night bus each night.

Other new routes include the Pink Line, which will serve the new developments on South Lamar Boulevard and will cost about $286,000 a year to run due to the number of buses needed on the route. That route, if approved, will also begin in October 2016.

What’s being temporarily called the Yellow Line Extended, will serve Hathorn Road and the Campus Walk and Campus Creek student housing developments, which are currently served by the Yellow Line; however the buses are often filled to the max, leaving people standing and waiting for the next bus. Akers said he’d like to see that route implemented in January.

Roof to be replaced on top of RSVP building