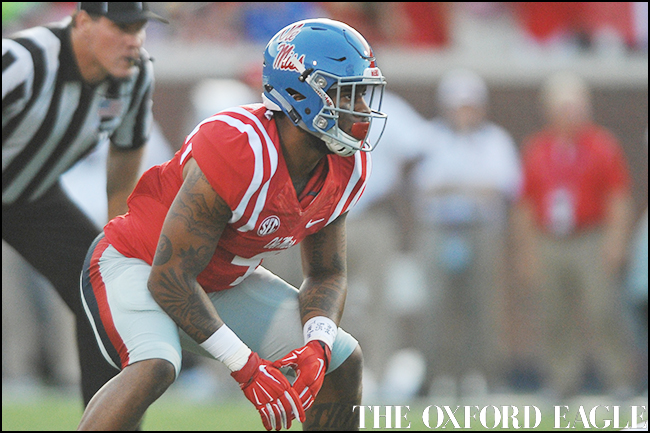 Ole Miss linebacker Denzel Nkemdiche has been checked into Baptist Memorial Hospital-North Mississippi in Oxford and remained in the hospital’s intensive care unit Wednesday night, according to a report by RebelGrove.com.

The reason for Nkemdiche’s hospitalization is unknown. Nkemdiche was admitted Monday, according to the report.

A hospital spokesperson told the EAGLE by phone Wednesday the hospital didn’t have anyone by that name checked into the facility, though patients can have their names removed from the hospital registry to protect their privacy if they choose.

Following the Rebels’ practice Wednesday, head coach Hugh Freeze said Nkemdiche was dealing with “a personal matter” but wouldn’t get into specifics. The 5-foot-11, 208-pound Nkemdiche is the Rebels’ top tackler with 53 stops.

“When issues come up that you need to get through that involve one of our players and anything with their family, we just want to support them and help them through it,” Freeze said.

With Nkemdiche’s status in limbo for Saturday’s game against LSU, sophomore DeMarquis Gates, who’s rotated frequently with Nkemdiche at the Stinger, or outside, position, is in line to get his second start of the season against the Tigers’ high-powered ground game driven by the nation’s leading rusher in Leonard Fournette.

Gates is third on the team with 48 tackles and tied a season-high with seven tackles against Arkansas.

“I think (Gates) is ready for this challenge,” Freeze said. “It’s a different kind of challenge for him, but we’ve worked really hard in getting him in the right spot and getting the right fits. We’re excited about him getting this opportunity.”

Brown questionable too
Defensive end Fadol Brown will be a game-time decision, Freeze said, as he deals with a fracture in his foot that will require surgery after the season.

Though the team isn’t sure when the injury occurred, Freeze said it’s a different kind of fracture where doctors have assured him playing on it won’t necessarily make the fracture worse. Brown, who started eight straight games before coming off the bench against Arkansas, has recorded 32 tackles.

“He’s just trying to just manage it just like we are with several to get through the year,” Freeze said.

More surgery likely for Taylor
Rod Taylor’s surgically repaired shoulder has “gotten better” throughout the season, Freeze said, but the sophomore guard is likely to have another operation done after the season.

Taylor, who tore his labrum during a boxing match in the preseason, was in line to be the Rebels’ starting right guard but has made just two starts with most of his strength gone at the point of attack. Redshirt freshman Jordan Sims has taken over there and will start his third straight game Saturday.

Another procedure means the Rebels likely won’t have Taylor back until the summer.

“From the first diagnosis he got, I would think the safest thing for him and his future is to fix it,” Freeze said. “I’d think it would be very difficult to be back for spring.”