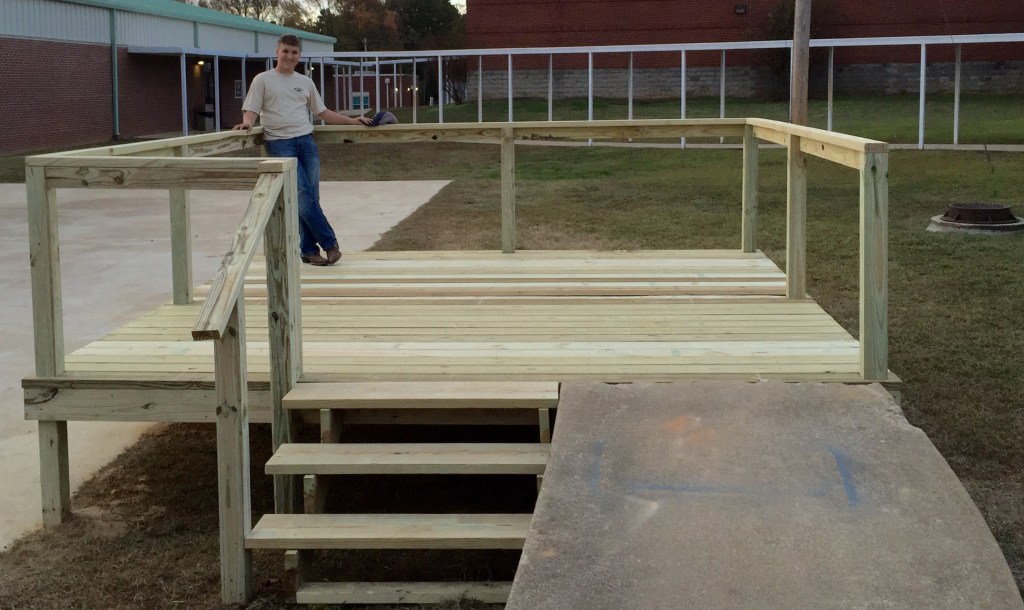 One Oxford Scout decided to make a lasting mark with his Eagle Scout project.

Chase Freeman, 15, saw a need to build an observation platform for Lafayette High School’s Air Force JROTC cadre, so he did it.

Chase said being in Scouts for nine years has given him the opportunity for leadership development and taught him to overcome obstacles.

“It’s taught me what I’m made of and what I can accomplish in life,” said Chase.

Chase designed the deck to fit the area and calculated the materials needed. He went from business to business and asked for support and was able to completely fund the project through donations.

The deck is four feet tall and 12 feet wide. It is sizeable enough for his commanding officers to use it for drill.

Chase’s parents, Ashley and Rob Freeman, told their son he had to finish his project before he applied for his learner’s permit to drive. That gave him the motivation to finish the project.

He has acquired more than triple the required badges needed.

At 13, he was elected senior patrol leader in Oxford’s Troop 45. The troop is youth-led to give the Scouts opportunity for advancement.

His father said he quickly rose through the ranks to the top because of his hard work and the respect of his peers.

Shortly after receiving his life-saving merit badge, Chase saved his younger brother from choking to death.

His brother Gage was choking on a piece of candy and Chase ran to him and gave him the Heimlich maneuver on him. His mother said even as a nurse it was a nerve-wracking experience for her. Chase received a special award from his troop as a surprise for his courage.

Chase also has completed a sailing adventure in the gulf. He was on a small schooner with eight other people. Most of them were boys his age. They had to sail and forage for their own food on board.

His future plans are to attend the University of Mississippi and join the Air Force for six years.

After he finishes his degree, he wants to get his master’s degree in military engineering.

Chase said he definitely sees himself as a Scoutmaster later in life.

“I’ve always been dedicated to Scouting,” he said.