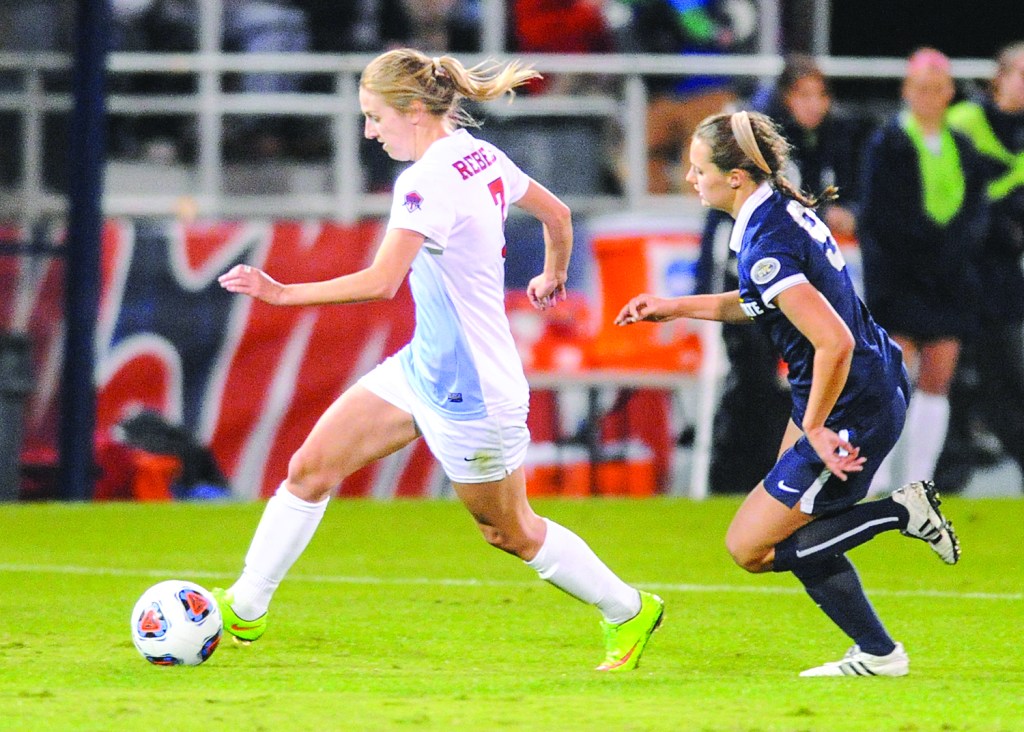 Ole Miss vs. Murray State in the opening round of the NCAA Tournament at the Ole Miss Soccer Stadium, in Oxford, Miss. on Friday, November 13, 2015.

An early goal was all Ole Miss’ soccer team needed in its first NCAA Tournament match because keeper Marnie Merritt and the rest of the Rebels’ defense didn’t allow Murray State to put anything in the back of the net.

The Rebels may need more than that tonight if they want to keep their season alive.

Ole Miss, fresh off its 1-0 shutout over Murray State in the opening round, will get a much stiffer challenge from Clemson. The Tigers, the No. 2 overall seed in the teams’ pod, have won 14 of their 19 matches this season and cruised past Furman in their first tournament match to set up a second-round matchup set for a 6 p.m. kick at Clemson’s Riggs Field.

Clemson’s offensive attack will be drastically different from that of Murray State, which had trouble finding creases on a night when Ole Miss’ defense was “very good,” Ole Miss coach Matt Mott said. Murray State got off just four shots with only one of them being on goal.

While the Tigers haven’t scored a ton of goals themselves (33), their constant attack has been good enough to eventually break through with the defense able to make it stand up more times than not.  Clemson is getting off 15 shots a game while keeper Kailen Sheridan has allowed just 18 goals, helping the Tigers finish tied for third in the Atlantic Coast Conference in the regular season behind only No. 1 Virginia and reigning national runner-up Florida State.

“They are going to put a lot more dangerous pieces up front,” Mott said. “They have a couple of special forwards, and their attacking-mid is very dangerous. They will put much more pressure on us. They are very organized in the back with an excellent goalkeeper who kicks the ball really well.”

More with less
While strong defense has been a constant for Ole Miss as of late, the Rebels’ lone goal against Murray State is the only one they’ve tallied in their last three matches. The Rebels had more chances in the match as Ole Miss dominated possession to put 10 of their 21 shots on goal.

The Rebels will have to finish what Mott feels will be the few chances his team gets against a Clemson defense that’s giving up just one goal per match and has allowed more than two just twice all year. But Ole Miss has as good a chance as anybody to threaten the Tigers with two of the SEC’s top scorers in freshman CeCe Kizer (14 goals) and junior Addie Forbus (11).

It could once again come down to which side blinks first.

“I think they will have the ability to make it tough on us if they score first, but I think we have the same ability,” Mott said. “I think it will be a one-goal game, one way or another. I don’t expect it to be very high scoring. I think their backline against our frontline is going to be a good matchup and a very neat thing to watch.”