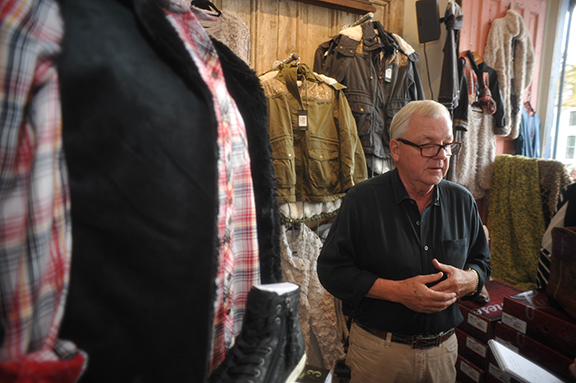 Hinton & Hinton opened its doors in Oxford in 1991 selling men’s clothing including a large inventory of men’s outerwear.

Forrest Hinton his son, Stephen, wanted to open the store before the first home University of Mississippi football game in early September when the weather is normally still pretty warm and summer-like.

The first shipment of merchandise arrived and it was mostly outerwear and coats.

And then a cold front came in, and Hinton & Hinton’s first weekend was a success.

“People came into town with no jackets or anything,” Forrest Hinton said. “And we still sell of lot of outerwear to this day.”

“I purchased AC’s Bed and Bath next door, took what she did best and hired her and merged it with our women’s department,” Hinton said.

The new area has allowed Hinton & Hinton to expand its women’s department that now has jewelry, perfume, bath products, sleepwear and clothing from name brands like True Grit, Barbour of England and Lucchese. They carry TASC exercise wear that is made from bamboo and allows the clothing to breathe and absorb moisture.

“We’re not in the dress businesses, we’re in the woman business,” Hinton said. “So any woman, any age or size can come in and find something they can wear every day.”

Also bigger is the store’s shoe and alteration department.

“This was really needed,” Hinton said of the two areas. “We’re not fighting for space now to try on shoes. And now people can come in and get measured in a more roomy private area.”

Hinton & Hinton can alter anything from coats to jackets to pants and shirts. They have an expanded alteration space on South Lamar Boulevard.

The store has its own leather line, where they design the jackets and have them made to their specification. Some of the leather is made in America, some in Italy.

“It’s exclusively our designs, which is pretty cool,” Hinton said.

With the expansion, Hinton & Hinton is now able to carry additional lines of clothes and different styles and of course, more women’s clothing and accessories. But the store still has the same clothing and boots that has made it a successful business since 1991, which includes True Grit and Patagonia, as well as its own line of clothing. The store also offers Filson luggage and custom-made silver and gold belt buckles and its own custom line of “Hotty Toddy” clothing, for Ole Miss fans.

The new expansion opened completely in September and Hinton said it’s been a great success, allowing his store to grow and offer more to his customers, along with creating a fun, relaxed atmosphere that makes shopping a pleasure.

He also credits his employees for making the expansion as easy as a task such an undertaking will allow. In particular he mentioned his women’s department manager, Whitney Smith, and his store manager, Mark Schoemake.