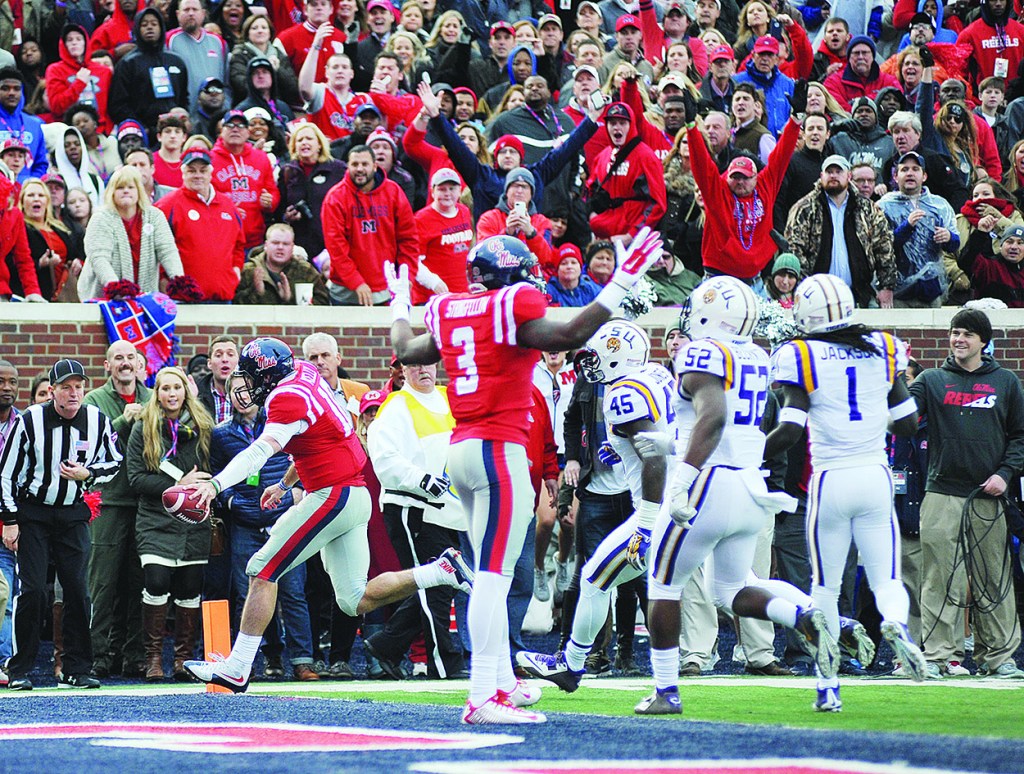 Two of the Southeastern Conference’s top offensive players were in Vaught-Hemingway Stadium on Saturday.

Kelly continued to make his case as the league’s top quarterback while Ole Miss’ defense rebounded from its disastrous performance against Arkansas to bottle up the nation’s leading rusher, and No. 22 Ole Miss kept its faint Western Division title hopes alive with a 38-17 win over No. 15 LSU in front 60,705 fans.

“None of this is possible without my teammates,” Kelly said. “There’s been a long list of great players that have played here, so it’s an honor. I’m just very blessed to be in this situation.”

His final touchdown toss helped swing the momentum in the Rebels’ favor for good when he rolled to his right to set up a throwback screen to Evan Engram, who outran LSU’s defense for a 36-yard score midway through the third quarter to give Ole Miss (8-3, 5-2 SEC) the three-touchdown lead.

“I’ve been waiting to call that for the last couple weeks really,” Ole Miss coach Hugh Freeze said. “Felt like it was something we hadn’t shown getting in that little motion package and then sprinting out away from it. That was a huge play in the game I think that really solidified us with some momentum.”

Engram and Laquon Treadwell, who also caught a touchdown for the sixth straight game, both led the Rebels with 58 receiving yards. Akeem Judd had 64 yards on 12 carries while Jaylen Walton added a 2-yard scoring run to help Ole Miss jump out to a 24-0 lead and eventually get just its second win over LSU (7-3, 4-3) in the last six years.

Fournette had his moments, his longest run going for 32 yards, but the Heisman Trophy contender never got in a rhythm against an Ole Miss defense that constantly crowded the line of scrimmage and forced quarterback Brandon Harris to throw more than he has in any game this season.

Harris had attempted just 182 passes coming in but threw a career-high 51 passes, completing 26 of them for 324 yards with two picks and a 39-yard touchdown pass to Tyron Johnson to get the Tigers on board with 1:14 left before halftime.

Fournette finished with 108 yards, 55 yards fewer than his season average, and picked up just 4.3 a carry after averaging nearly 7 through LSU’s first nine games.

“Everybody’s effort was great today,” said linebacker DeMarquis Gates, who had a game-high 14 tackles. “With him, you’ve got to gang-tackle and have two, three, four people on him. It was a good game for us.”

The Tigers made things interesting with 10 straight points to start the second half on Trent Domingue’s 43-yard field goal and William Clapps’ recovered fumble in the end zone after Jaylen Walton fumbled the ensuing kickoff to cut Ole Miss’ lead to 24-17. But the Rebels stopped the bleeding with a seven-play, 83-yard drive capped by Kelly’s 11-yard scoring run before taking control with Engram’s touchdown reception on the next possession.

“You’ve just got to understand that right now, you’ve really got to score,” Kelly said of the back-to-back scoring drives. “You’ve got to have the momentum.”