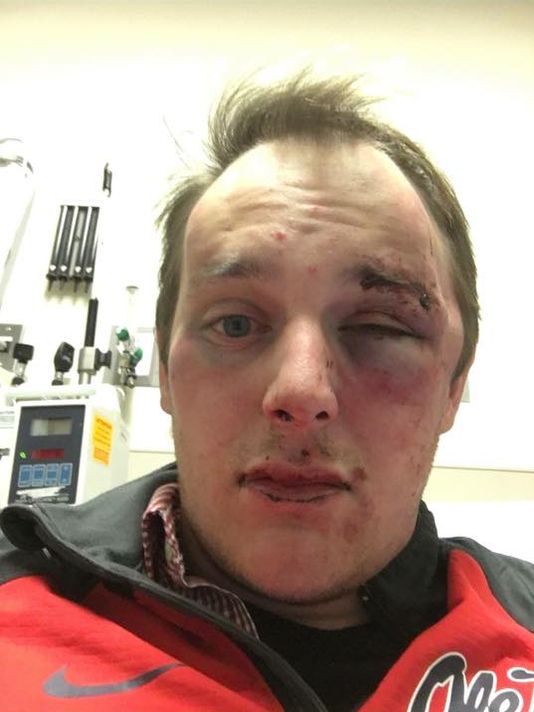 The man, who is the subject of a viral video showing a police officer punching him in the face at the Ole Miss Rebels game against Louisiana State University Saturday, was arrested on three charges, according to jail records.

Chris Barnes of Oxford was charged with disorderly conduct, public drunkenness and resisting arrest. He was released about four hours after his arrest.

Barnes’ wife, Holly, posted a video after Barnes’ arrest on Facebook. She claimed her husband, an U.S. Army National Guard veterans, was wrongfully accused of something that was done by someone sitting a few rows behind him when officers approached them.

The video shows a verbal argument and two officers attempting to get the man to sit down and a struggle occurring although there are several people in the way. The video then shows one of the officers punching the man in the face.

The University of Mississippi Police Department released a statement Sunday morning saying the officer was not an officer with UPD.

In her Facebook post, Barnes claims her husband went to the emergency room and was diagnosed with a concussion, fractures to his orbital wall and maxillary sinus and contusions to the tissues of his eyes. She claims her husband was actually punched twice in the face.

The Barneses did not immediately respond to the EAGLE for comment. WTVA reported this morning they spoke to Chris Barnes but was told he could not comment further until speaking to his attorney.

The video had more than $12,000 shares just from Barnes page and countless others on various other pages. Some claiming to be witnesses to the incident have posted on social medial sites claiming Barnes was drunk and belligerent, swearing loudly and defying the police officers; however did not appear to be violent. Others claim the officer was out of line and that Barnes was simply trying to explain he was not the person they were looking for. The incident has sparked countless debates throughout the LOU community and beyond.

The University of Mississippi did not respond to questions this morning as to whom the officer in the video is or what police department he works for.

An official from the Lafayette County Sheriff’s Department said this morning that Sheriff F.D. “Buddy” East is expected to release a statement in regards to the claims of the detention center denying Barnes medical attention sometime later today.

The video made its way onto the Oxford Police Department Facebook page; however OPD responded their department was not involved in any capacity in the incident.

UPD Chief Tim Potts said Sunday morning he could not comment further since it was an open investigation. However, UPD is asking any witness to contact UPD at 662-915-7234.

Prevent burglary over the holidays