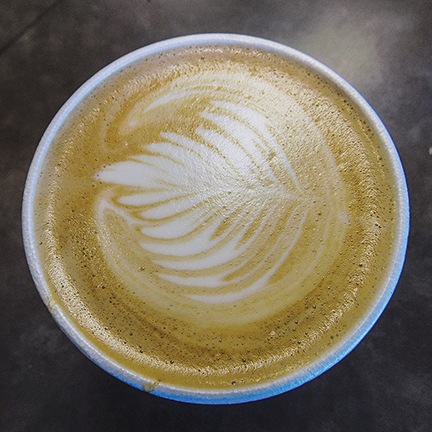 Reuben Granger, a barista at Cups on Jackson Avenue, creates artwork in the cups of coffee he gives to customers.

Reuben Granger, 21, works part-time as a barista at Cups on Jackson Avenue in Oxford while attending school at the University of Mississippi. He specializes in putting latte art in customers’ drinks.

“It was like the cherry on top. You finish making the drink and you put like a little picture on top,” Granger said.

Granger said he believes when customers order a coffee it brightens their day to have a fern or rosetta design.

Coffee is a “necessity” for many people. Many people are busy or in a rush to get their caffeine and get out. The art makes people smile and appreciate their coffee in more ways than one.

First, Granger puts the desired flavoring or syrup in the cup. He then grinds coffee beans and makes the espresso shot. The milk has to be heated to the correct temperature to create a layer of frothy foam on top.

The most common designs in latte are the “heart” and the “fern” patterns. The fern is a leaf pattern on top of the latte.

Granger grew up in Pearl. He originally worked at the Cups coffee shop in the Fondren area where he first learned his barista skills. It took him a while when he first started to master pouring and other techniques.

“It took a minute though, I wasn’t just whipping out latte art when I first got there,” Granger said.

He worked during high school and afterwards he moved to Oxford. He currently majors in exercise science due to his interest in science.

Granger applied to the Cups coffee shop on Jackson Avenue and was hired shortly after. Not every employee at Cups is able to do art, but more are practicing.

Granger said he enjoys putting designs because it individualizes the drink for the customers.