Ole Miss, MSU ROTC team up for common cause 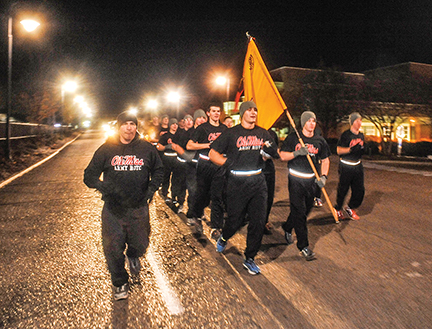 Michael Resha carries a football as Ole Miss Army ROTC cadets begin the 3rd Egg Bowl Run on Monday. Ole Miss ROTC cadets ran the ball before handing it off to Mississippi State ROTC cadets, who will finish the run to Starkville.

The University of Mississippi and Mississippi State University may be rivals, but that does not keep their prospective ROTC cadets from coming together for a good cause.

“It is an honor to be enrolled in Ole Miss Army ROTC,” said Cadet 2nd Lt. Cody Becker.

Becker was tasked with planning and organizing the Egg Bowl Run. He said contacting alumni and seeing their donations for the 100-year anniversary of the ROTC is exciting and participating in the Egg Bowl Run has been a great experience for him.

In addition to the run, the Ole Miss ROTC is currently raising funds for a community project as part of Egg Bowl efforts this Thanksgiving.

On Monday, Ole Miss ROTC had three vans of cadets with Cadre drivers. They ran the distance in increments in pairs. Once done, they would hand the ball to another pair of cadets and so on for the 50 miles.

MSU ROTC Cadet Sam Ratcliff said he felt accomplished as he completed his segment of the run.

“It was really cool to see all of the State fans and Ole Miss fans,” Ratcliff said. “We ran a lap around the square in Calhoun City and a bunch of kids ran with us and it makes you feel really proud to know that those kids look at you like a superhero.”

Ratcliff said the rivalry did play into how competitive each of the ROTC cadets were.

“We all are one big green army team but you know, they started the ‘Hotty Toddy’ chant and we rang our cowbells at them so it was definitely a good, fun rivalry for us,” Ratcliff said.

Becker said the Egg Bowl Run shows that the cadets will work together and displays the unity of state and country.

“This event is important because even though we are running in light of the football rivalry, all of the cadets will one day be on the same team — the United States military,” Becker said.