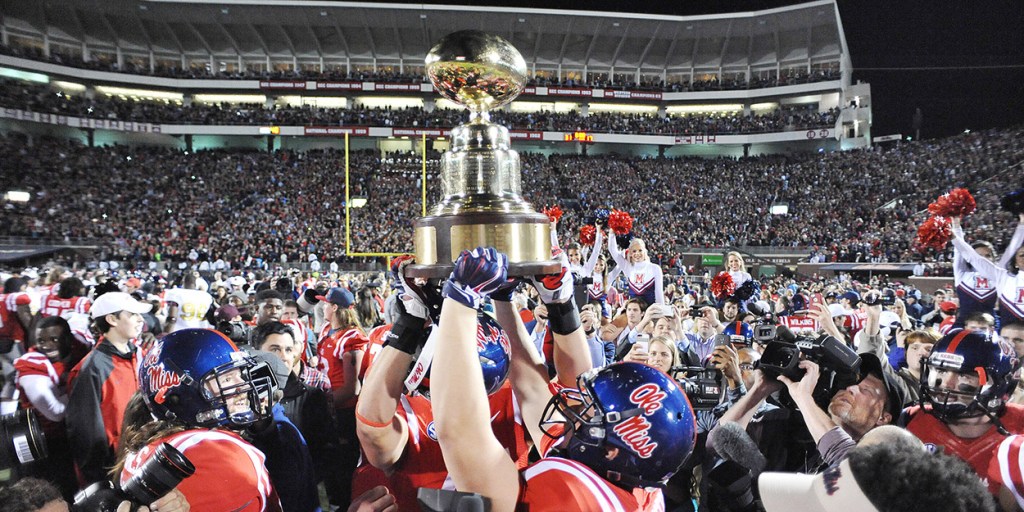 Ole Miss players hold up the Golden Egg following the win over Mississippi State at Vaught-Hemingway Stadium in Oxford, Miss. on Saturday, November 29, 2014. The home team has won 10 out of the last 11 games.

A Bush was still the President, Facebook was four months away from reinventing how people make “friends,” and it was the last time Ole Miss defeated Mississippi State in Starkville.

A lot has changed in the world, though a Bush is still seeking the oval Office, but one thing that has not is the fact the Rebels are 0-5 inside the confines of Davis Wade Stadium since that 31-0 win over the Bulldogs.

That could change Saturday when No. 19-ranked Ole Miss heads down Highway 45 for another crack at No. 22 Mississippi State on the Bulldogs’ home turf in the Egg Bowl (6:15 p.m., ESPN2).

In 2013, Ole Miss had its best chance to exorcise its Starkville demons when the Rebels forced the 110th edition of the Egg Bowl into overtime. The win was not meant to be though as quarterback Bo Wallace fumbled the football inches before crossing the goal line. Mississippi State recovered the ball in the end zone, securing the 17-10 win.

Even with the five-game losing skid in its rival’s backyard, Ole Miss holds the advantage in games played in Starkville 20-14-3.

In recent memory, the Egg Bowl series has not faired well for the visiting team no matter who it is. Since that win in 2003, the road team has lost 10 out of the last 11 games. Mississippi State defeated Ole Miss 31-23 in Oxford to end the 2010 season.

“It’s just like any other rivalry game you know, the home-field advantage, the energy of the crowd. You’re playing in your atmosphere,” defensive back Mike Hilton said. “It makes it comfortable for the home team. It’s going to have a big impact on the game Saturday.”

Mississippi State has one of the most unique environments of any team in the SEC. That is due to one thing — the cowbell.

Christopher Walken may have felt the need for more cowbell in that famous Saturday Night Live skit years ago, but if he stepped foot inside Davis Wade Stadium, that need would be satisfied and then some.

Due to an agreement with the NCAA, the Bulldog faithful are not allowed to take their artificial noisemakers on the road, but they are allowed to clang them at will in Starkville during appointed times. That poses problems for opposing teams.

“Those cowbells, they get to you,” safety Chief Brown said. “It’s a loud ringing noise. It throws you off focus, especially when the offense is on the field. It’s going to be hard to communicate, so it can cause some complications. … It’s going to be a different atmosphere with the cowbells. We just have to come out and prepare with the speakers at practice. Hopefully we can get the job done.”