UPD chief of police settles in to new position 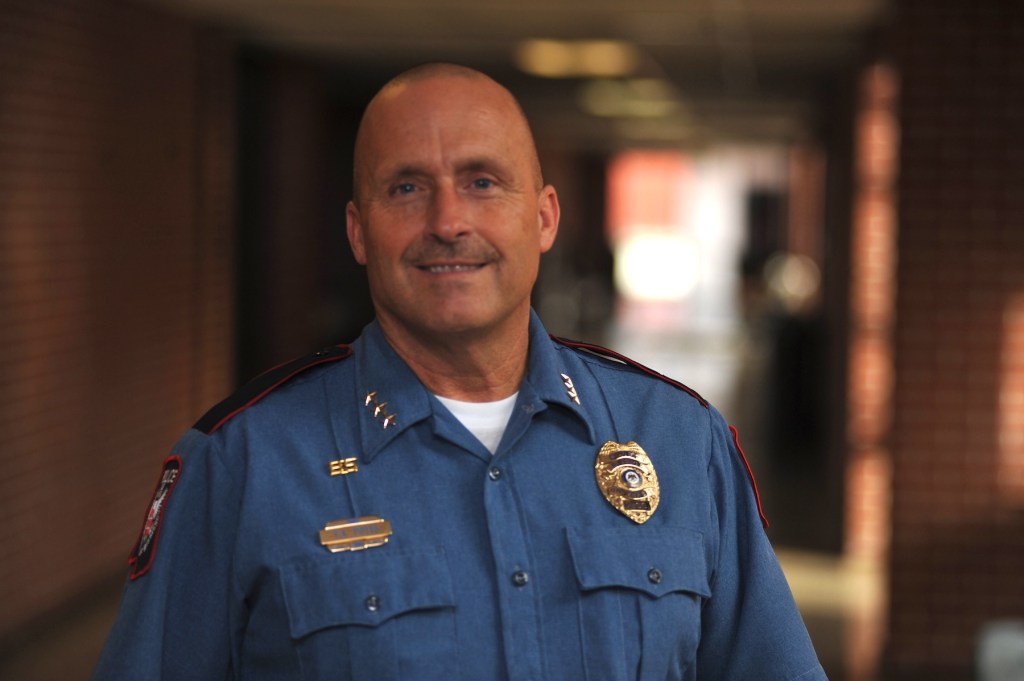 His daughter, Haley, who he has raised as a single father for most of her 18 years, was starting her senior year in Indiana where the two lived.

“I called MSU and told them that I couldn’t come,” Potts said recently during an interview with the EAGLE. “If this was my only chance at being a chief of police, I was fine with passing that up. I have one daughter and I wasn’t going to mess up being a father and I’ve never had any regrets.” Potts, 50, stayed in Brookston, Indiana, with Haley and was able to walk her out on field during senior night in the various sports she played and watch her be crowned homecoming queen. “It was a great senior year,” Potts said.

“And I’m grateful I was there for it all.”

Toward the end of her school year, someone from MSU contacted Potts and told him the chief of police position was opening up at Ole Miss.

“Even after I pulled out, they still thought enough of me to tell me about this new opportunity,” Potts said. “That really touched me.”

Haley is living with Potts’ sister while in her first year at community college in Indiana. Potts said he is hoping she chooses to move to Oxford and attend Ole Miss next fall after completing some of her core courses.

For now, Potts shares a home in Oxford with his dog and has spent the last five months learning about Oxford and Ole Miss and finding it easier each day to call it home.

“The pace is very much like West Lafayette and Purdue,” he said.

Potts received his bachelor’s degree from St. Joseph’s College in Renssalaer, Indiana, and is a graduate of the Federal Bureau of Investigation National Academy. He’s also a trained assessor for the Commission on Accreditation for Law Enforcement Agencies.

An avid runner, his biggest challenge moving to Oxford is battling the hilly terrain.

“It is a challenge for sure,” he said with a chuckle. “But I’m looking forward to the (Double Decker) half marathon in the spring.”

Potts worked at Purdue University Police Department for 18 years, eventually making captain — a position he held for 12 years before coming to Ole Miss. As captain, he said he was able to be very “hands on.”

“Now I find myself in more meetings than I’ve been used to,” he said. “That was a big adjustment for me.”

The first couple of months for Potts as the new chief of police ran relatively smoothly. And then football season began.

“You hear stories about the Grove but until you actually experience it, you don’t quite understand what it’s like,” he said.

To make his first home football game a bigger challenge, he realized that officers working the game, the Grove and regular patrol were all working on the same radio channel.

“That made it very hard to communicate,” he said. “We had that changed within a week.”

A pleasant surprise, Potts said, was being able to coordinate security at Vaught-Hemmingway Stadium in the university’s emergency operations center.

“We have the ability to monitor video cameras and crowd behavior from the press box level,” he said. “We can coordinate all police, medical and security functions from one place. It’s really helped us, not only in the stadium but coordinating traffic issues with other law enforcement agencies.”

Other than football games, in his few short months, Potts had dealt with the university being in the national spotlight, in particular with Ole Miss’s decision to take down the state flag because of the Confederate flag symbol.

“It was already on my radar before I arrived,” he said. “So I wasn’t unready for it. I felt the university handled it professionally and we treated the flag with respect when we did take it down.”

UPD officers had to escort people off campus during rallies about the flag issue. During one such protest, two known KKK members were found with guns in a truck after UPD officers guided them off campus.

“In most cases, we escorted people off campus for their own safety,” he said. “There’s a lot of different opinions on the issue and you start using hateful speech, well, we just needed to get them off campus peacefully, and we did that.”

Since he started at Ole Miss in July, Potts has formed a committee to examine UPD’s uniforms and a fitness committee, designed at implanting a fitness test annually for all officers.

“We’re instituting a testing procedure for current and future officers,” he said. “We owe it to our officers, their families and the community to have our officers in the best shape they can be. We’re dealing with a population who is perpetually 18 to 25 years old but we’re not staying the same age.”

Along with an emphasis on fitness, Potts said he has tweaked the department’s field training requirements.

“We’ve had a lot of turnover in the last three years,” he said. “When that happens, you’re just trying to get people on the streets and sometimes training can fall on the wayside. I was in charge of training at Perdue and that’s something I’m very passionate about.”

Potts said he hopes to continue to move UPD forward by upgrading equipment, such as installing iPads in the officer’s vehicles so they can do reports without having to come back to the office.

“I think it’s easy for someone on the outside to come in and see there are a few things we can do to come out from behind the curve,” he said. “We may still be behind in our technology from other departments. But I would put our officers up against any other law enforcement agency. We have some great officers, many with college degrees and we do all we can to help them achieve their personal goals.”