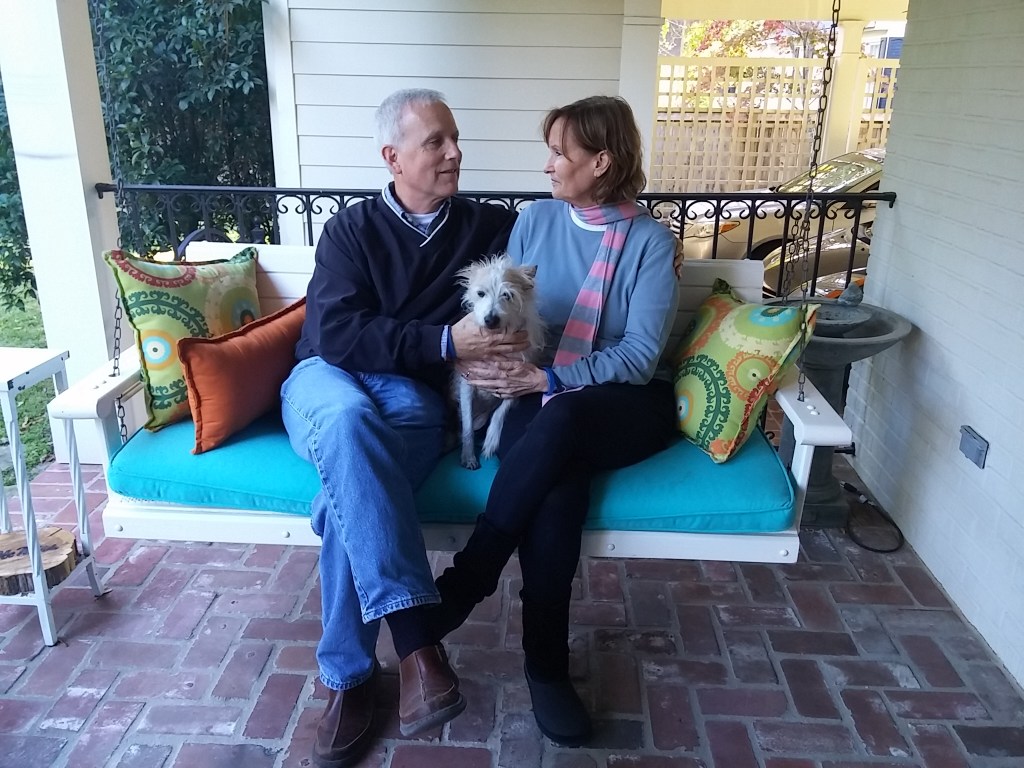 stephanie rebman Billy and Catherine Crews chat on their porch swing with their dog Pete over the weekend. After the couple moved to Oxford in 2013 Catherine was diagnosed with a life-altering cancer.

Catherine Crews is one of a kind in so many ways.

There’s the twinkle in her eye, her passion for painting and her love of yoga. And most recently it’s her being one of just three people ever known to have survived a certain rare, genetic, aggressive cancer.

Shortly after moving to Oxford in 2013 with husband Billy, Catherine found out she had a malignant tumor. After radical surgery that involved removal of part of her jaw and rebuilding it, seven weeks of chemotherapy, 32 radiation treatments and a year of healing, the 58-year-old is now finding her “new normal” and is grateful to still be here as a mom, wife and friend today on Thanksgiving.

As someone who was the embodiment of a healthy lifestyle, taught yoga and was in touch with her body, Catherine knew when something was awry in September 2013.

She visited her dentist and the tumor was discovered in her upper right jaw.

“Something we teach in yoga is get to know your body,” she said. “I’m very in tune and I knew something wasn’t right. I went to the dentist and one thing led to the other. And then we just sought out the best care we could find.”

“I was originally diagnosed with another malignant tumor and it turned out, once I had the surgery, the pathology indicated an even more rare cancer,” NUT midline carcinoma, she said. “When they resected it, some pathologist did the test. One of the reasons why it’s so rare is because it goes misdiagnosed and they are just now getting this test out to hospitals and saying if you have this and that symptom, test for this. And so by the grace of God some pathologist at some lab did the test and it saved my life.”

Billy said at that point, Johns Hopkins referred them to the Dana-Farber Cancer Institute in Boston.

“Someone suggested that if we hadn’t been at Johns Hopkins, they probably would have never diagnosed it correctly,” he said. “That was one fortunate step in the process.”

Billy and Catherine’s children are thankful for that care, because it was the three of them who found the best and begged her to fight.

“Our daughter and her husband are the ones that found Johns Hopkins for us, and they’ve all played significant roles in different ways. They made me get out of my comfort zone. I wanted to stay locally,” she said.

“My oldest son, he’s the one that talked me into having this surgery. Going through with it. Because, actually, when I first got the news I said, ‘I’m not doing this.’ I always thought if I got cancer that meant my time was up, that I wasn’t going to do whatever it took to survive.

“I had called my children to tell them I have this horrible cancer, I just can’t go through this surgery. It’s too invasive, it’s too much, I just can’t do it. And my oldest son, he pleaded with me to fight the fight. So, I really did it for my family. I didn’t do it for me.”

There’s not a lot of information out there about NUT midline carcinoma (NMC), Catherine said.

What is known is it is, “a rare genetically defined, very aggressive epithelial cancer that usually arises in the midline of the body and is characterized by a chromosomal rearrangement in the nuclear protein in testis (NUT) gene,” according to Wikipedia.

Catherine said about 20 to 30 cases are reported in the U.S. each year, but experts believe there must be more that are undiagnosed. When the tumor involves the head and neck, like it did with Crews, then pain, a mass, obstructive symptoms and more may be experienced.

Catherine said the tumor is highly resistant to traditional chemotherapy. It may respond initially but then rapid recurrence happens and then death. Overall, the mean survival rate is six to nine months after an individualized treatment plan.

“I’m one of just three survivors of this cancer,” she said. “I’m about to approach the two-year mark and not many, if any, have made it past two years. Nobody’s guaranteed. My doctors say because so many things fell into place in the right time, that helped with my surviving this.”

Catherine has been in touch with some other people with the same diagnosis. “There’s only one left and he’s 18 years old and he’s from New Jersey,” she said. “I talk to his mom almost daily. I’m a friend to her and a support to her. I offer her hope.

Catherine and Billy return to Boston every three months for scans to check and see if the cancer has returned, which also takes its toll emotionally.

“After my last checkup, which was in October, I came away and I had mixed feelings,” she said. “I really had some symptoms and thought the cancer was back. A lot of people go through that, and I really thought that this was it and they were going to tell me it was back. They told me it wasn’t. So whenever I leave an appointment, I go, ‘so now what am I going to do?’ I live my life for every three months and I go, ‘OK, now what do I do?’”

One thing she does is set goals.

“I wanted to see my youngest son get married, which I got to see in June of this year,” she said. “I got to see our second grandson be born and I got to see our first granddaughter be born. So I’ve made it through some goals that I set for myself.”

Her highs and lows, fear and guilt started with the diagnosis and continue today. Catherine said sometimes she feels like “the lone survivor of an airplane crash.” What she and Billy found helpful was not keeping it inside and talking to friends, family and using the online site Caring Bridge.

When first diagnosed, the couple would post updates daily. Then it would go to once a month and now they post after each checkup.

“I consider myself a private person, but when I got this cancer, I just, like the day or next day that I found out, went public on Facebook, which is so unlike me,” Catherine said. “But I just thought to myself, ‘I can’t do this by myself’ and I just went public with it and then Caring Bridge and we just laid it out there. We were honest and raw and it was healing for us. A lot of people said it was helpful for them but it was equally healing for us to just put it out there and not try to carry it ourselves. It’s definitely not a solo journey.”

Even though Catherine posted her final diagnosis online for friends and family, she never looked it up and read what the Internet had to offer about her cancer. She said she didn’t want to know.

“It was only this year that I’ve had the courage to read about it,” she said. “I’m not sure I would have believed in myself, if I had known what my odds were. So now I know, but before, Billy and I just knew what we had to do and we did it. We just had tunnel vision and we just went for it.”

But now that she’s read about NMC, she knows why her friends and family were so concerned. She knows why they made “Courage for Catherine” bracelets in her honor and raised money for her care.

“They were just great cheerleaders,” she said. “I have five siblings and they all rallied behind me, and of course Billy has been my rock and I couldn’t have made it without him.”

Billy, who is now with the University of Mississippi, was with Teach for America of Mississippi at the time of the diagnosis and was able to work half-time and remotely.

“We were totally focused on this together for about four months,” Billy said. “If I had had to quit working, I would have quit working because it’s not a solo journey.

“Probably the most poignant Caring Bridge I wrote was entitled ‘I am a Witness,’ so that was kind of my role in part to witness what she was going through and in witnessing it, support her. Support her by witnessing the radical surgery and witnessing the horrific treatment regimen that she survived.”

He also witnessed her frustration at having to endure such a diagnosis after being a vegetarian who never smoked, didn’t drink, took no medications and considered herself in the top 5 percent of people living a healthy lifestyle.

“My good health did not keep me from getting cancer. It’s a genetic cancer, but I think that my good health helped me to survive it,” she said. “When we would go in for radiation treatments, we would see these people and they were just really beat. There were people much worse off than me just as far as the toll that it takes on you. You have to be up for it physically, mentally — you know, to survive just the treatment. They just kind of beat you up until you can’t take it anymore.”

Billy said they coined the phrases “never get stuck” and “keep moving forward” when the treatment got tough.

After a year of recovery, Friday was the first time Catherine taught a yoga class since her diagnosis and selling her yoga studio in Tupelo.

She fights through pain in her face daily due to muscle contraction and scar tissue, which makes her self-conscious.

She carries a water bottle everywhere because salivary glands were damaged in radiation.

A neighbor who helped the Crewses during the fight against cancer was recently diagnosed with her own, and Catherine is trying to be her support system and a helper.

She only has 50 percent of her taste and can’t open her mouth like a normal person.

She enjoys walks in the neighborhood.

She is “beyond thankful” to have the opportunity to figure out a new normal,” Billy said.

She waits for that next scan.

She sticks to her healthy lifestyle and meditates and thinks about her life.

“Everybody tries to find their purpose in life, and I think because of this cancer that’s more pronounced for me,” Catherine said. “If I have been fortunate enough to survive this rare cancer, then is there a greater purpose for me? And I’m trying to figure that out. I don’t have the answer. I’m open to learning and figuring it out.”

But she does know what is the most important thing in life.

“Cancer has a way of narrowing your focus to what’s important and really, there’s nothing more important to me than family and relationships,” she said. “All the rest is just fluff.”