COLUMN: Egg Bowl has all the makings of QB duel 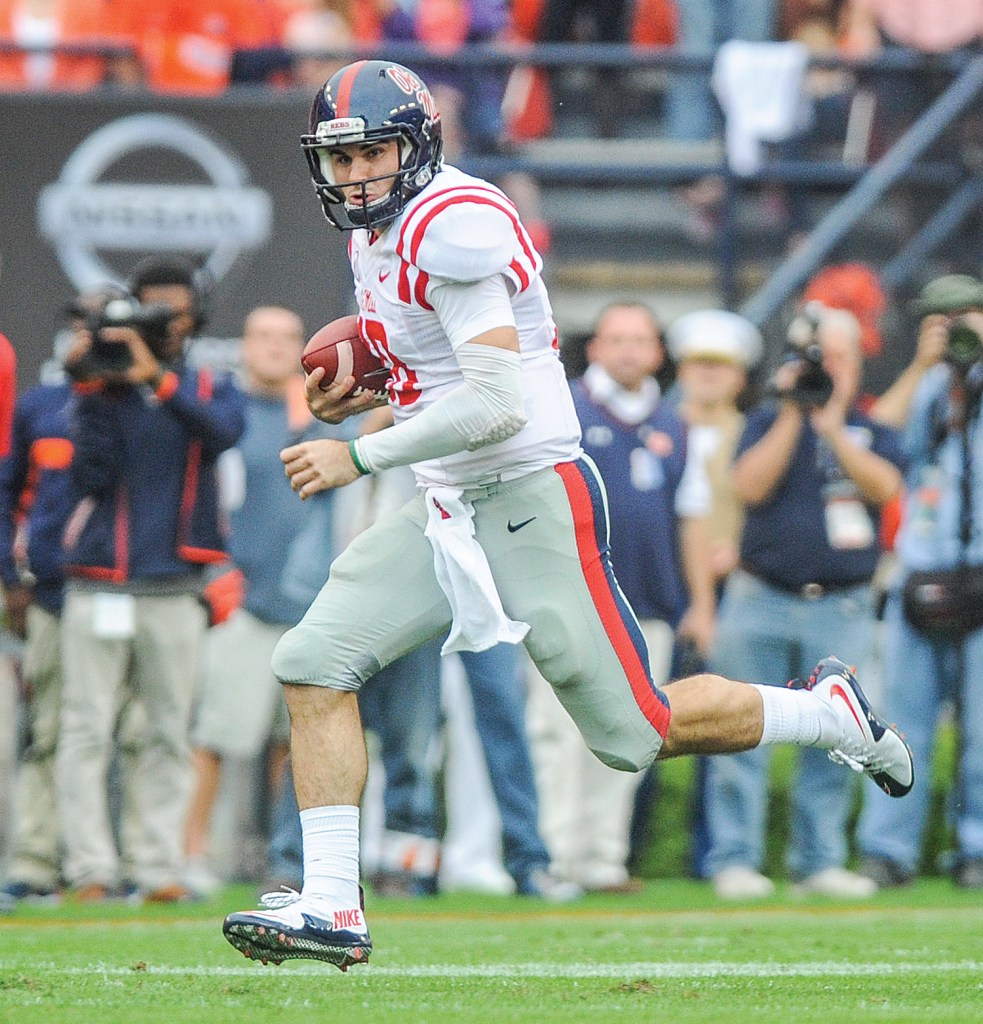 Ole Miss Rebels quarterback Chad Kelly (10) runs for a first down against Auburn Tigers at Jordan-Hare Stadium in Auburn, Ala. on Saturday, October 31, 2015.

The latest rendition of the Egg Bowl could play out a number of different ways Saturday.

Maybe Mississippi State continues what’s been more than a decade of dominance against the Rebels on its home field and makes it six straight wins against its rival in Starkville. Perhaps the Rebels finally end their misery in Davis Wade Stadium and become the first Rebel team since 2003 to walk out of there with the Golden Egg.

You’d have to give the Bulldogs the edge here simply because winning games in this series is kind of what the home team does. Since the turn of the century, only twice have the visitors come out victorious: that Eli Manning-led Ole Miss bunch 12 years ago and Mississippi State in 2010.

But I don’t expect a winning margin of two touchdowns or more either way like Ole Miss pulled off last season or like five of the last seven meetings have been decided by. It’s hard to envision this thing not going down to the wire because of what’s shaping up to be one of the better quarterback duels this rivalry has ever seen.

We all knew Dak Prescott was good, but Mississippi State’s one-time Heisman contender has refined his game to where he’s just as much of a threat to beat you with his arm as he is his legs.

The pair have been the best quarterbacks in the Southeastern Conference this season and will likely be the first- and second-team All-SEC selections once it’s over (although Arkansas’ Brandon Allen may have something to say about that). Kelly and Prescott enter Saturday’s game as the top two passers in the league and have combined for nearly 7,500 yards of offense.

The 6-foot-2, 230-pound Prescott has always been known for his thunderous running style, but he’s made the Bulldogs’ offense even more dangerous with a passing game that’s got him within 280 yards of throwing for the most yards he ever has in a season. Kelly was the exact opposite coming out of East Mississippi Community College last season by way of Clemson, a strong-armed, gun-slinging prospect who was looking for another chance, but Kelly has led the Rebels in rushing each of the last two games and leads Ole Miss with nine rushing touchdowns.

Both will have the opposing defense trying to catch its collective breath.

Kelly, whose 3,504 passing yards are tops in the SEC, has played 11 games at Ole Miss and already has passed Bo Wallace (seven 300-yard passing games in a single season, 3,857 yards of total offense in a single season) and Eli Manning (34 touchdowns accounted for in a season) in the school’s record books. Prescott has thrown for at least 300 yards in six games, and the quarterback who holds 38 school records is fresh off the most prolific game he’s had throwing the ball in a Bulldog uniform with 508 passing yards and five touchdowns in a 51-50 win over Arkansas.

Allen, much like many of the quality quarterbacks Ole Miss and Mississippi State have faced this season, had his fun against the local defenses, combining for 848 passing yards and a whopping 13 touchdown passes. Now Kelly and Prescott take their turn against the SEC’s ninth-ranked (Mississippi State) and second-worst (Ole Miss) defenses against the pass.

Players earlier this week didn’t want to go as far as to say they expect a Big 12-type shootout to break out in Starkville, but it sure feels that way.

COLUMN: Only consistency about Rebels’ D is inconsistency