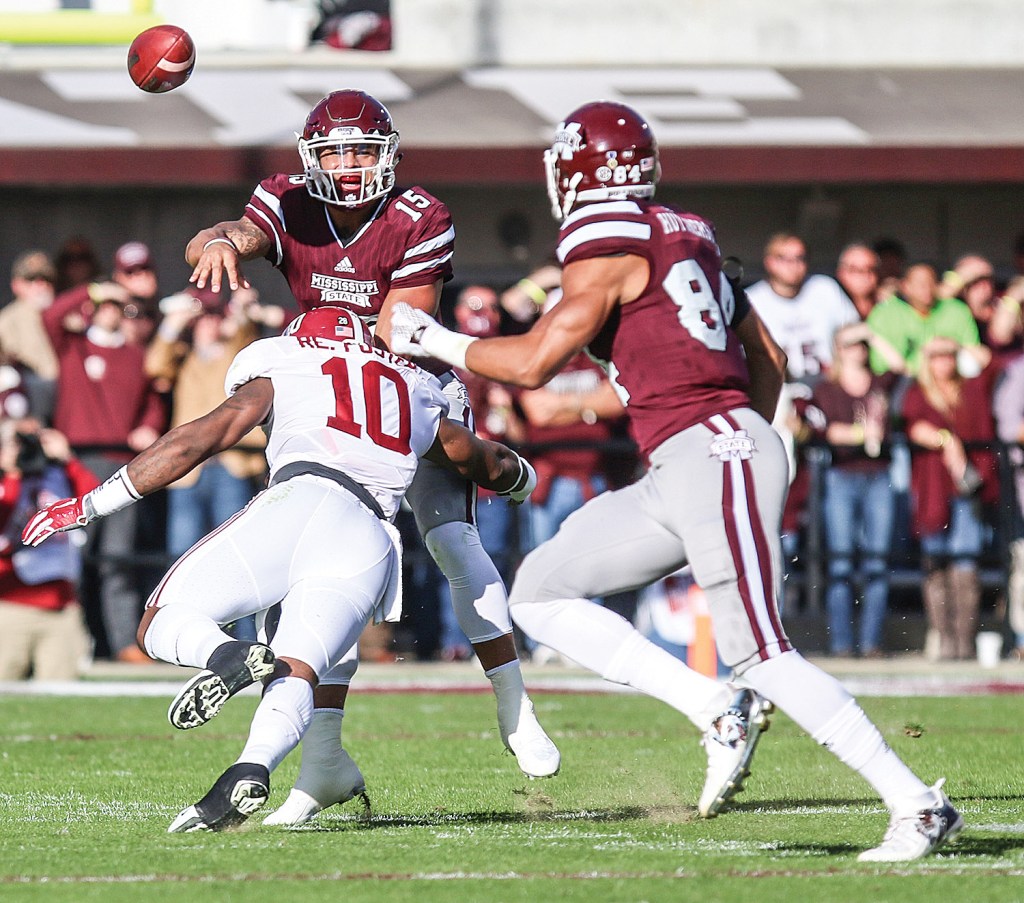 Mississippi State quarterback Dak Prescott (15) is hit by Alabama linebacker Reuben Foster (10) as he throws in the first half Saturday in Starkville. Alabama sacked Prescott nine times and went on to win 31-6. (Walter Frazier/For The Vicksburg Post)

It’s been a pretty common occurrence the past three seasons for Dak Prescott to burn defenses with his legs.

Now that he’s consistently shredding them with his arm, Mississippi State’s quarterback has become a true dual threat — and a huge test for an Ole Miss defense that’s been picked apart plenty of times this season.

The 6-foot-2, 230-pound Prescott is on track to have the best passing season of his career, ranking second in the Southeastern Conference in passing yards (3,159) and third in touchdown passes (23). Prescott has still done his usual damage with his feet with 478 rushing yards and nine rushing touchdowns, but the senior is throwing far more often from the pocket than he’s running from it.

With just two games left starting with the annual Egg Bowl against the 19th-ranked Rebels (8-3, 5-2 SEC) on Saturday (6:15 p.m., ESPN2), Prescott has run it 83 less times than he did all of last season and is just 290 yards from matching his passing total from a year ago. He’s completing his passes at a career-high 66.2-percent clip.

“Tremendous improvement,” Ole Miss safety Chief Brown said of Prescott. “He’s been having a great year so far. He’s going to be coming out ready to play. He’s a great player, so we’ve got to come out ready to stop him because if we don’t stop him, he can hurt us.”

Prescott has turned in a number of noteworthy performances to help him set 38 different schools records during his career, but none of them were better than what he did last week in the Bulldogs’ shootout win over Arkansas. He passed for a career-high 508 yards and five touchdowns and added 46 yards and a pair of scores on the ground, becoming the first quarterback in SEC history to account for at least 550 total yards and seven total touchdowns in a game.

“They have one of the most tremendous leaders that we’ve seen in this conference in Dak,” Ole Miss coach Hugh Freeze said. “He’s a great player, a great leader, a winner, competes at a high level and gives that offense a chance to be really special at times.”

Prescott leads the SEC’s second-ranked passing offense against a Rebel defense that’s allowed the second-most yards through the air in the conference. Against four of the league’s top six passing offenses it’s seen this season, Ole Miss has allowed more than 283 yards on average.

Maybe the only quarterback in the conference playing better than Prescott is Ole Miss’ Chad Kelly, who’s thrown for a league-best 3,504 yards and 25 touchdowns for the SEC’s highest-scoring offense. Kelly has even gotten involved in the running game as of late, taking off on designed calls — and improvising on others — to accumulate 191 yards and five touchdowns on the ground in the last two games.

“We’re good, and they’re good,” Kelly said. “It’s going to be a hard-fought game like it is all the time. Mississippi State versus Ole Miss. What more can you ask for?”

The Rebels may need the same kind of effort from Kelly if his defense can’t slow down a new and improved Prescott, who threw for 282 yards against Ole Miss last season as the Bulldogs (8-3, 4-3) tried to play catch-up but was limited to 48 rushing yards on 24 carries in the Rebels’ 31-17 win.

“We were really able to disguise coverages and show different things and have him confused,” defensive back Mike Hilton said. “We’re going to work on that this week and hopefully have the same results.”

If not, it could come down to which quarterback has the ball in his hands last.

“(Prescott) is very talented at both (running and passing), and they’re true to who they are,” Freeze said. “They spread you from sideline to sideline and give him a lot of options once the ball is snapped.”