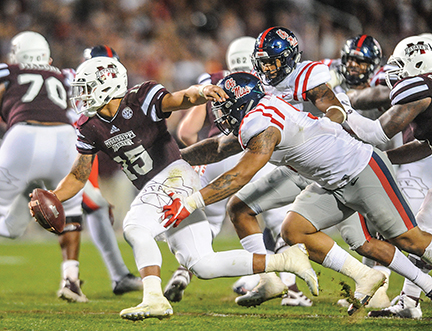 STARKVILLE — It was supposed to be Dak Prescott’s farewell celebration. The senior Mississippi State quarterback played in his final game at Davis Wade Stadium Saturday night, and he was supposed to dominate the entire night.

Only problem is that nobody informed the Ole Miss defense.

The Rebels spent most the of the night in the Mississippi State backfield, sacking Prescott seven times in their 38-27 Egg Bowl win.

It was the most sacks recorded by Ole Miss in a game this season. The previous mark was four against New Mexico State on Oct. 10.

The Rebels also had nine tackles for loss.

Sacks were not the only factor to Mississippi State’s slow start. In his final game at home, Prescott had one of his worst performances in the first half.

On the Bulldogs’ first possession, Prescott broke loose on a run only to be hit, causing him to fumble and have Ole Miss recover. The rest of the first-quarter drives ended in a punt, an interception, a field goal and a turnover on downs and the half expiring as Prescott was sacked once again.

“I thought we executed extremely well in the first half,” Ole Miss defensive coordinator Dave Wommack said. “(Prescott) is the guy you had to stop. He’s their guy. A great football player, and they spread you all over the place. I think he’s thrown the ball so much better this year than in the past.”

The interception was a 45-yard pick-six by Tony Bridges, who read Prescott’s throw the entire way. It was also a throw under pressure as the Rebel defensive front was barreling down on him.

“We wanted to force him into some bad throws, and we wanted to make him uncomfortable,” defensive back Mike Hilton said. “We were disguising coverages in the back end, and the front seven were getting a lot of pressure on him. When we got hits on him, we could tell it was wearing on him.”

Defensive tackle Robert Nkemdiche, playing in likely his final Egg Bowl, recorded 1.5 sacks while Marquis Haynes, D.J. Jones, Woodrow Hamilton, Channing Ward and Breeland Speaks all sacked Prescott. Linebacker C.J. Johnson had half a sack, teaming up with Nkemdiche to tackle Prescott near the end of the first half.

“To come out and finish in a rivalry game and dominate the game like we did for most part of the game I thought was a great bounce back,” Johnson said.

Prescott was still going to get his yards, it was just a matter of how many, or in Ole Miss’ case how little, Prescott ended with via his arms and his legs. He finished 31 of 42 for 254 yards and two touchdowns while rushing for a team-high 63 yards and one score on 21 carries.