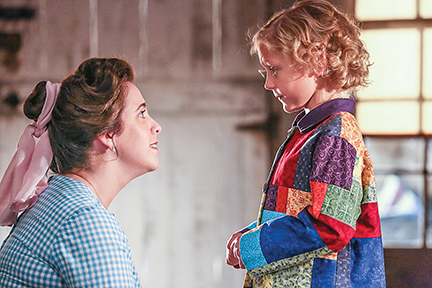 Quantrell Colbert/NBC Mary Lane Haskell, left, as Miss Moody and Alyvia Alyn Lind as Dolly Parton star in Dolly Parton’s “Coast of Many Colors” to air on NBC on Dec. 10.

Sam Haskell, former executive vice president and worldwide head of television for the William Morris Agency and owner of the executive chairman and CEO of the Miss America Organization, has dealt with countless stars over the last 30 years. Some, he still calls friend. One of those stars is Dolly Parton, who asked Haskell to produce four movies for NBC based on Parton’s songs.

“Dolly and I have been friends for more than 30 years,” Haskell said. “I was very honored when she asked me to be a part of this project. She has been asked for over a decade by agencies to do this series of movies based on her songs. She told me recently that she couldn’t think of anyone else she’d rather have had produce them with her. I was very touched by that.”

The first of the four movies, “Coat of Many Colors,” will air at 8 p.m. central time on NBC on Dec. 10. The movie is a snap shot of one year in the iconic stars life that took place when she was a young child in 1955. It’s based off the song that Parton has often said is one of her more favorite songs she’s ever written.

“It’s a heartwarming, inspirational film,” Haskell said. “You’ll need a box of tissues for this one.”

Haskell, who now resides in Oxford with his wife, Mary Donnelly Haskell, not only is producing a film for a friend, but his own daughter, Mary Lane Haskell plays little Dolly’s teacher, Miss Moody.

“Not only as a producer, am I so impressed with Mary Lane’s performance, but to hear others raving about her, that makes the father in me so proud as well,” Haskell said of his daughter.

While the character is lightly based on a real teacher in Dolly’s life, Mary Lane said she is proud to be playing a teacher who goes above and beyond to recognize the special talents in a child.

“I get to pay homage to teachers everywhere,” she said. “There are teachers who inspire young artists everyday. Dolly was surrounded by music her entire life. But some children are not and there are teachers who recognize those talents and nurture them. I know I’ve had so many teachers over the years who did that for me.”

The movie was completed in September and is in the final editing process.

“This movie shows what happened with a little coat that changed her life forever,” Haskell said. “It’s a movie for anyone who has a dream.”

Haskell said while the film was shot in Georgia, he hopes his Oxford neighbors will watch the movie on Dec. 10, because he wants to share the moving story with everyone.

“I really hope everyone in Oxford watches this movie,” he said. “It’s such a touching, unbelievably beautiful story I know they would appreciate.”

Little Dolly will be played by newcomer and 8-year-old Alyvia Alyn Lind.

“Alyvia is just amazing,” Mary Lane said. “Such a darling, professional actress and I can’t wait to see what she does next.”

Another Oxford tie to the movie is Gerald McRaney, who plays Dolly’s grandfather who was a preacher. McRaney is an Ole Miss alumnus.

The next film will be based on Parton’s song, “Jolene,” but will be a fictional story and not based on anything to do with Parton’s life. The third movie will be based on the song, “The Seeker.” The song for the fourth movie has not yet been selected.

All four movies are expected to be released in 2016.

Mary Lane said she felt God’s presence throughout the filming of the movie.

“He was on set with us,” she said. “The other actors, directors and crew members would look around between takes and feel what an incredibly blessed set and film this is. God has his hands on this project as He has on most things Dolly has done in her life. It’s an honor to give my talents to something so special. Especially leading into Christmas, it serves as a real reminder of the reason for the season.”