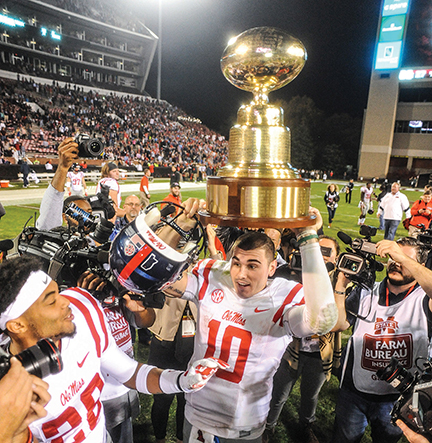 STARKVILLE — Ole Miss’ latest trip to its rival’s backyard was different than all the others over the past decade.

Quarterback Chad Kelly and his defense made sure of it.

No. 18 Ole Miss ended the regular season with a 38-27 win over No. 21 Mississippi State in front of 62,265 fans at Davis Wade Stadium on Saturday. Kelly racked up at least 310 yards of offense for the fourth straight game and accounted for three touchdowns while the Rebels’ defensive front dominated the line of scrimmage to limit Mississippi State quarterback Dak Prescott and the Bulldogs’ offense until the game was well in hand and help Ole Miss get out of Starkville with the Golden Egg for the first time since 2003.

“Excited to take that Egg back to Oxford,” Ole Miss coach Hugh Freeze said. “It means so much to our people and to our program. Thrilled. Excited.”

Ole Miss (9-3, 6-2 Southeastern Conference) lost out on a chance to represent the Western Division in next weekend’s SEC Championship Game when Alabama beat Auburn earlier in the day, but the Rebels put themselves in contention for a Sugar Bowl bid with the win coupled with Florida’s loss to Florida State.

“I mean, kind of,” linebacker C.J. Johnson said when asked if there’s a lingering sting of missing out on the SEC Championship Game, “but after you play a game like that in this stadium against those guys, it don’t really matter anymore.”

It was never really in doubt.

The Rebels scored the game’s first 21 points and led 28-3 at the half after Kelly’s 36-yard touchdown pass early in the second quarter to Damore’ea Stringfellow, who had five catches for a career-high 84 yards and caught a pair of touchdowns. The SEC’s leading passer was sharp for most of the night, finishing 21 of 30 for 236 yards and two touchdowns with no interceptions.

Kelly added 74 yards on the ground with a 27-yard scoring run to get Ole Miss on the board first, contributing to a 243-yard rushing effort for the Rebels, the second-most Mississippi State (8-4, 4-4) has allowed this season. Jaylen Walton had a game-high 93 yards on 16 carries.

“It’s huge to win this game,” Kelly said. “It means everything to this university, to our players, and I’m just excited to be a part of this great team.”

Kelly’s run was set up by a turnover when DeMarquis Gates popped the ball loose from Prescott with the Bulldogs driving on their opening possession, and the Rebels never allowed the senior to get in a consistent rhythm from there. Prescott completed an Egg Bowl-record 31 of his 42 passes but averaged just 8.1 yards on those completions as Ole Miss’ pressure rarely allowed the Bulldogs’ second-ranked passing attack in the SEC to take advantage of the Rebels’ second-worst pass defense.

Prescott’s lone pick was returned 45 yards for a touchdown by Tony Bridges late in the first quarter to put the Rebels up 21-0. He ran 21 times for just 63 yards, and Ole Miss got to him for a season-high seven sacks.

“Love the way we started,” Freeze said. “I felt like our (defensive) line was an advantage going into the game.”

Prescott’s 1-yard touchdown run on the Bulldogs’ opening possession of the third quarter followed by a 27-yard field goal from Westin Graves got Mississippi State within two scores at 28-13, but 10 straight points from Ole Miss, including Jordan Wilkins’ 38-yard touchdown run early in the fourth quarter, didn’t allow the Bulldogs to get any closer until Prescott’s second and final touchdown pass to Malik Dear with 1:17 remaining.