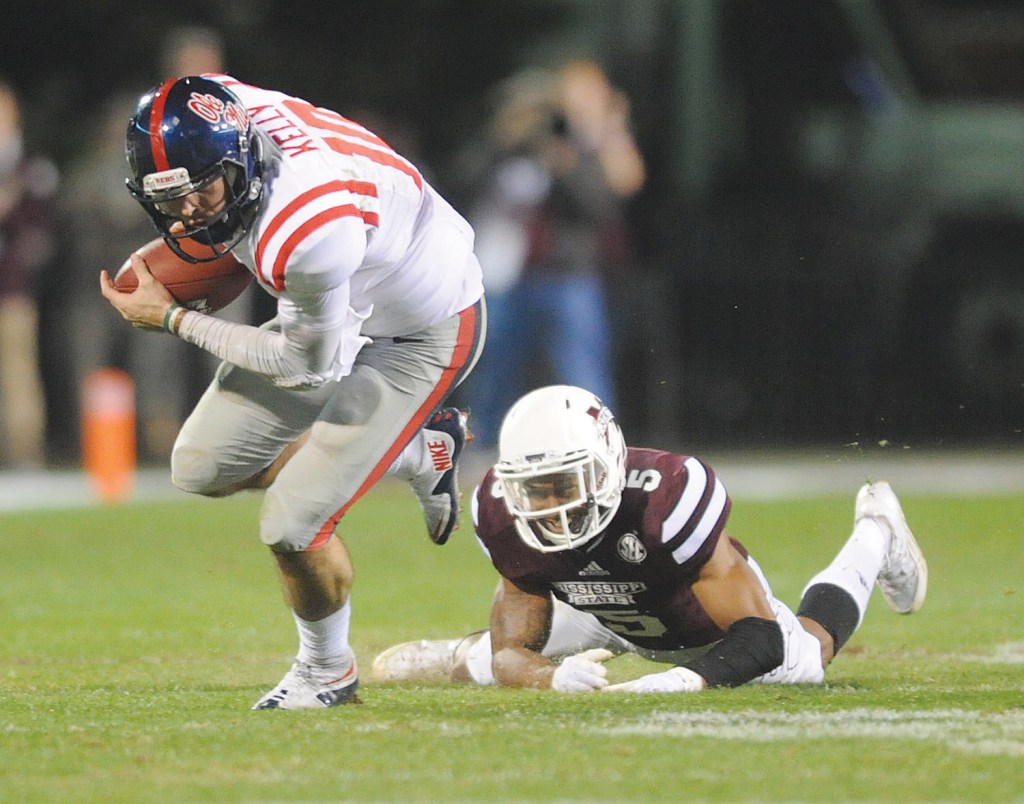 STARKVILLE — Ole Miss’ most recent game in Starkville could’ve easily played out like many of the others in recent memory.

The Rebels were going against a new and improved Dak Prescott, who, as the Southeastern Conference’s second-leading passer, looked as if he was in for the same field day so many other signal callers have had this season against Ole Miss’ secondary.

And if the Bulldogs jumped on Ole Miss early, what would be the motivation to really fight back other than a little pride given that the Rebels found out as they were taking the field at Davis Wade Stadium that Alabama had just beaten Auburn to officially eliminate them from Western Division contention?

But Ole Miss barely let the Bulldogs get going, looking nothing like the previous five Ole Miss teams that traveled to Scott Field and lost all those games by a combined score of 141-68. The Rebels’ defense flew around to keep Prescott under wraps despite the Bulldogs’ too-little, too-late charge, and the offense piggybacked off of it to go up 21-0 and essentially put the game away by halftime.

By the time it was over, Ole Miss had its first win in Starkville in more than a decade, 38-27.

If you knew Ole Miss was going to lose three games in the regular season before it started, even the most optimistic fans would’ve guessed they would’ve come from some combination of Alabama, Auburn, LSU and Mississippi State considering the Rebels’ wretched history in Davis Wade Stadium.

Yeah, just how we all thought it would happen.

Now the Rebels are in prime position to steal a Sugar Bowl bid from the Gators, who will be this year’s Eastern Division sacrificial lamb for Alabama in the league title game Saturday (seriously, the Gators don’t have a quarterback without Will Grier and scored two whole points against Florida State yesterday. Yikes.).

The Rebels looked like that kind of team with that win in Tuscaloosa and the win in Starkville and nothing close to it in a blowout loss to those Gators and that sobering setback to Memphis that had many wondering in mid-October if Ole Miss could even finish in the upper half of the Western Division with a roster that’s deeper and more talented than any in Hugh Freeze’s tenure headlined by a handful of future first-round draft picks.

Ole Miss came back with back-to-back wins over Texas A&M and Auburn before fourth-and-25 happened against Arkansas, the play that, while 60 minutes of porous regulation defense after the Rebels’ Jekyll-and-Hyde unit looked as if it had figured some things the previous two weeks led up to that infamous overtime moment, ultimately kept the Rebels from getting to Atlanta.

But give Freeze and his staff credit. In a roller coaster of a season that’s seen so many up and downs and would’ve been easy to come off the tracks following that loss to the Razorbacks, the Rebels absorbed the bumps, stayed on the ride and finished it with another nine-win season, the first time Ole Miss has done that in back-to-back years since the 1960s.

Should Florida get pummeled by the Crimson Tide as expected, Ole Miss’ win Saturday means the Rebels will almost surely be ringing in the new year in a second straight New Year’s Six bowl.

And if I told you that before the season started, I’m sure any Ole Miss follower would’ve taken it.