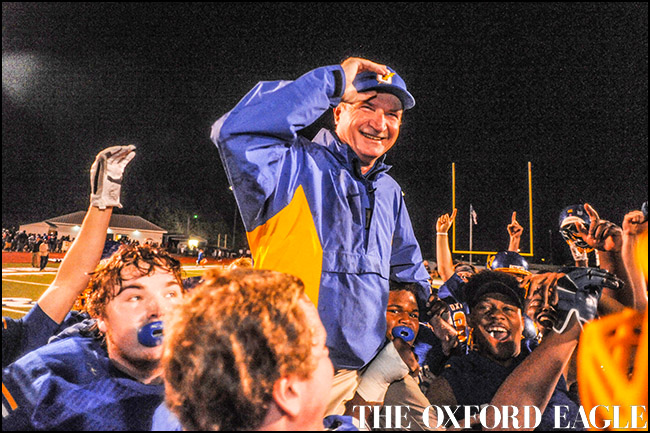 Oxford High head coach Johnny Hill is picked up by players following the game against West Point in the MHSAA Class 5A North Half playoff in Oxford, Miss. on Friday, November 27, 2015. Oxford won to advance to the state championship game against Wayne County, which will be played at Vaught-Hemingway Stadium.

Third time is the charm?

That is something Oxford will be able to put to the test.

The Chargers handled West Point with ease en route to their third straight MHSAA Class 5A North Half championship with a 35-7 victory at Bobby Holcomb Field Friday night.

It was the third consecutive time Oxford (12-2) has climbed the top of the mountain in north Mississippi. The game also marked the final time that Chargers head coach Johnny Hill took the field at home as he is retiring after next week’s game.

“It’s history. I’m glad we won the last time we played (at Bobby Holcomb Field),” Hill said. “We’ll still be practicing on it and all that, but I’ve got tunnel vision and it’s look at that last game. Next week will be my last game and our last game this year, so I’m just going to stay focused and go from there.”

Friday’s matchup was not as close with the Charger defense up to the challenge, slowing down running back Chris Calvert and the Green Wave offense.

After punting on its first possession, Oxford quickly got the ball back when Tias Hillard intercepted Green Wave quarterback Marcus Murphy’s pass. It only took four plays for Oxford to march 39 yards, capping the drive with a 29-yard pass from Jack Abraham to Ken Presley for the early 7-0 lead.

It appeared Oxford could be in for another shootout when West Point answered on its next drive. Calvert scored on a 1-yard run, which was set up by a 51-yard run from running back Archie Jones, tying things up 7-7 late in the first quarter.

Lockdown defense
That was the last time West Point would see the end zone. The Charger defense played what Hill felt was its best game of the season. Besides the touchdown drive and interception, the rest of West Point’s possessions ended with three turnovers on downs and three punts.

With the score still tied, West Point attempted to convert a fourth-and-2 at the Oxford 45-yard line but was unable to do so. It was a pivotal moment in the game as the Chargers scored on their next possession for what would be the game-winning touchdown.

“They’ve got a real running, potent offense,” Hill said. “Our guys, we didn’t get outflanked. We missed some tackles early, and then in the second half, we started getting off our blocks and locking on. That shut them down in the second half.”

Offense keeps rolling
It was another night at the office for the Charger offense.

Abraham threw for three touchdowns and 309 yards, completing 24 of 35 passes. He did have one interception when Randall Johnson snagged a deep throw over the middle late in the first half.

Two of those touchdowns passes ended up in the hands of Presley, who had 10 catches for 125 yards. D.K. Metcalf had one touchdown catch for 22 yards, giving the Chargers the winning margin.

“We’ve been together for so long and the chemistry has been there, and I’m so proud of these guys,” Abraham said. “We practiced hard this week. We’ve been through this before. We not going to celebrate that much, but we’re going to get together next week and focus on next week.”

Running back Hiram Wadlington has been a huge factor for Oxford ever since Drew Bianco had to step away from football after a nerve injury in his shoulder occurred early in the season.

The past two weeks have seen Wadlington step up even more and become not only a threat on the ground but another weapon for Abraham to utilize through the air. The sophomore accounted for two rushing touchdowns of 1 and 10 yards, respectively, but also had 47 yards receiving on three catches.

“I’ve been working hard at practice and trying to fill in for Drew, and I’ve just been trying to do my hardest,” Wadlington said. “I prepared harder when we went against our scout team. So I thank my scout team.”

Hill is not bashful when it comes to comparing his young running back to one of the greats in the game.

“He’s got very good ball skills,” Hill said. “He’s got great vision. He runs a lot like Barry Sanders out there. He can dance and then dart and he’s gone.”

Oxford will get its third chance in as many years to become the kings of 5A when it faces Wayne County (11-3) in the state championship Saturday at 7:30 p.m. at Ole Miss’ Vaught-Hemingway Stadium.