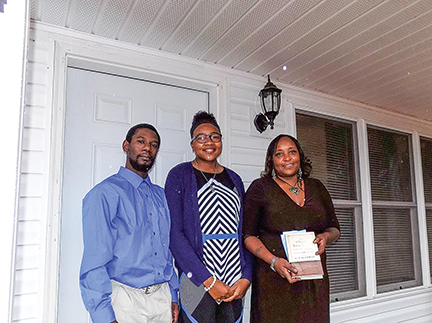 Alyssa Schnugg The Simmons family moved into their new home recently that was built through the Oxford-Lafayette Habitat for Humanity organization. A home blessing and dedication ceremony was held Sunday at the new home. Myron Simmons, left, 14-year-old Andreel Ward and Taiwana Simmons, right, helped construct the home with dozens of volunteers. The home took just short of two years to build and is located in the Brittany Woods subdivision.

With the new year still several weeks away, Taiwana Simmons is already celebrating a fresh start with her family.

Simmons, her husband Myron and her daughter Andreel Ward recently moved into their first owned-home in Brittany Woods, thanks to the thousands of volunteer hours put in to building the three-bedroom home through the Habitat for Humanity organization.

The family moved in earlier this month and on Sunday, a dedication was held for them by Habitat for Humanity.

Donald Cole, president of the Oxford-Lafayette Habitat for Humanity, introduced board members and volunteers who attended the dedication ceremony. Pastor Alfred Hall II of Philadelphia Missionary Baptist Church did the opening prayers and blessing of the home.

The family was presented with flowers, “so your house will always know beauty;” a lit candle so the “house will never know darkness;” a Bible and the keys to their home to show it is their home now, not just a house. Local blues singer Effie Burt performed a song, “Bless this House,” for the family.

The house took two years to build, according to past president Caitlyn Hopper.

Joe Skinner served as construction supervisor when the original supervisor had to leave the project half way through.

This is the 14th home the local Habitat organization has built for a Lafayette County family.

“It takes us about two years to build a home,” Hopper said. “We are all volunteers and most have jobs so we do most of the work on the weekends. And of course, weather can be a factor.”

The family has to go through credit checks and a financial review before being selected for a house. They have to prove they can make their payments, which is based on income. The family also must work 500 hours at the construction site, helping to build their home.

Andreel said she was excited to be in her new home but admitted she was glad the construction part was over.

“It was hard,” she said with a smile. Andreel attends Oxford High School. Her new bedroom is already decorated with tiny white lights and pictures of families and friends.

However, the new home isn’t the only “new” something that the Simmons are celebrating.

Simmons was born with polycystic kidney disease, a genetic disorder that causes numerous cysts to grow in the kidneys and inhibits the kidneys’ function. She received a new kidney earlier this year.

Despite having a kidney transplant, Simmons said she was back out helping to build her new home as soon as she could.

“It didn’t stop me from getting back out there for long,” she said.

Having a new home, their own home, means a new life for the Simmonses.

“It means a future, a step forward,” Simmons said sitting on her new black couch in her new living room. “It means, everything.”