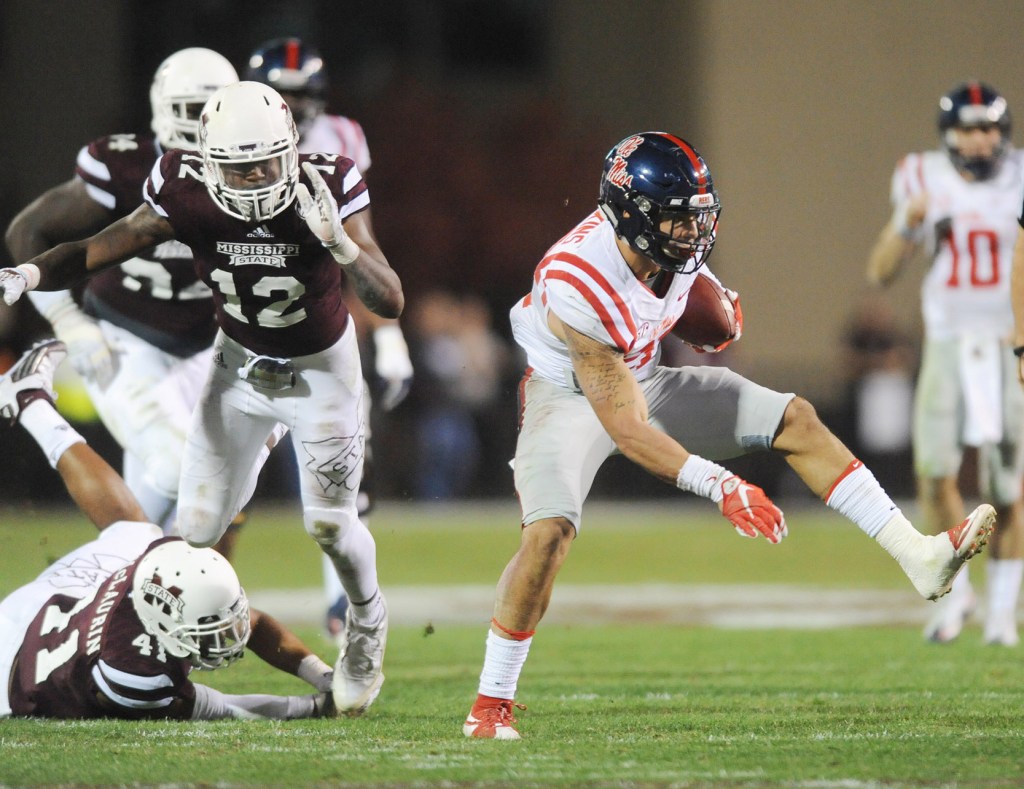 C.J. Johnson said he just wants to play his last game “somewhere sunny,” but his coach is hoping the Rebels have done enough to remove all the natural elements from their final destination this season.

Ole Miss finished the regular season with an emphatic 38-27 victory over rival Mississippi State on Saturday in Starkville, a game which the Rebels (9-3, 6-2 Southeastern Conference) led by as many as 25 and never saw Mississippi State get any closer than two scores.

The game didn’t matter in the Western Division race since Alabama clinched its spot in the SEC Championship Game with its win over Auburn earlier in the day, but now the Crimson Tide could possibly do Ole Miss a favor if they beat East champion Florida on Saturday.

“I’m going to keep my fingers crossed that we get in one of those New Year’s Six (bowls) for sure,” Ole Miss coach Hugh Freeze said.

Freeze wouldn’t come out and say the Sugar Bowl, but that’s the bowl Ole Miss would play in should it be a part of the New Year’s Six for the second straight season.

The Sugar Bowl is obligated to take the highest-ranked SEC team unless that team is a part of the College Football Playoff, which Alabama, ranked No. 2 in the playoff rankings, would be should it beat the Gators. The bowl would then fill that spot with the next highest-ranked team from the conference, which is currently Florida, though the Gators will take a fall following their loss to Florida State on Saturday.

Florida is ranked 12th in the playoff rankings, Ole Miss 18th. If the Rebels don’t pass Florida when the new rankings are released Tuesday, they almost surely will when the final set of rankings are revealed Sunday should the Gators stumble against Alabama. The Sugar Bowl is annually an SEC-Big 12 matchup played at the Mercedes-Benz Superdome in New Orleans on New Year’s Day.

Orlando, Florida (Citrus Bowl) or Tampa, Florida (Outback Bowl) appear to be worst-case bowl destinations for the Rebels, who won four of their last five games to ensure themselves of consecutive nine-win seasons for the first time since 1961-62.

Chance at redemption
But the Rebels have their sights on the Big Easy and other another New Year’s Six bowl after a lethargic showing in a 42-3 loss to TCU in last year’s Peach Bowl.

“We want another chance at that,” Freeze said. “I want a shot at that, and I think if I can sell our kids with the way Chad (Kelly) is playing and Laremy (Tunsil) and Rob (Nkemdiche) and Laquon (Treadwell) and those guys, I think our fans will travel. We would love the honor of coming to one of those New Year’s Six bowls.”

Said defensive back Mike Hilton, “Wherever we go, just work. Finish the season off right against whoever we play and just make sure we send these seniors out right.”