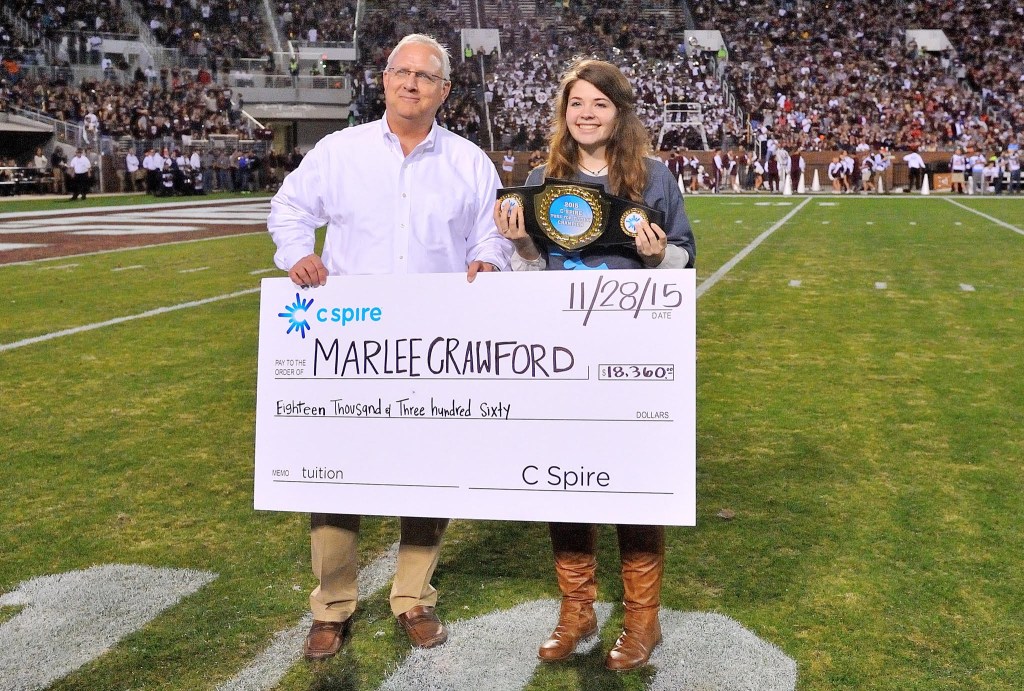 Marlee Crawford is presented a check from C Spire’s Jim Richmond after winning the Toss for Tuition corn hole competition Saturday in Starkville.

The Rebels were not the only students who returned to campus victorious after the 2015 Egg Bowl.

“College is expensive as every student knows, and every little bit helps,” Crawford said. “This, though, was more than I could have ever asked for — a huge blessing.”

She said she was extremely shocked when she found out she was headed to the Egg Bowl championship. Crawford had entered the contest after playing corn hole for an entry slip. She only entered once, but that was the one name drawn out of the 56 C Spire stores in Mississippi that participated.

Crawford was serious about competing and began training for the big day immediately. She borrowed a corn hole set from a family friend and asked around for advice on how to prepare.

“I practiced for hours several days during the break perfecting my form and aim, but also learning the game as well,” she said.

A small entourage of her parents, her boyfriend, uncle and one close friend accompanied her to Starkville the day of the game; they functioned as Crawford’s support system and coach while she prepped. The crowd cheering helped her as well.

“Once it started, I hardly looked up at the crowd and just focused on the game,” Crawford said. “I was shaking the entire time and my heart was racing — I guess you call that adrenaline. The crowd grew and actually ended up helping my confidence, offering encouraging words and cheering me on solely because I represented Ole Miss.”

After winning, Crawford walked onto the field where she was presented with the title belt and a tuition check for $18,360.

Crawford’s parents were nervous before the game, but they have embraced her accomplishment wholeheartedly.

Her father, Ray Crawford, said it is a relief to her and her parents to know the payment has been taking care of.

“I think it will change the rest of her time at Ole Miss by allowing her to be less stressed about student debt,” he said. “I hope she will be less worried about her college career now that this scholarship is covering so much. The less student loans the better.”

She said both her parents are thrilled, but still might be in shock of it all. However shocked, Crawford knows where the financial boost will help. In the future she plans to study abroad in England before she completes her degree.

“I owe a huge thanks to C Spire, to the people who helped me, and also to God for this amazing blessing,” she said.