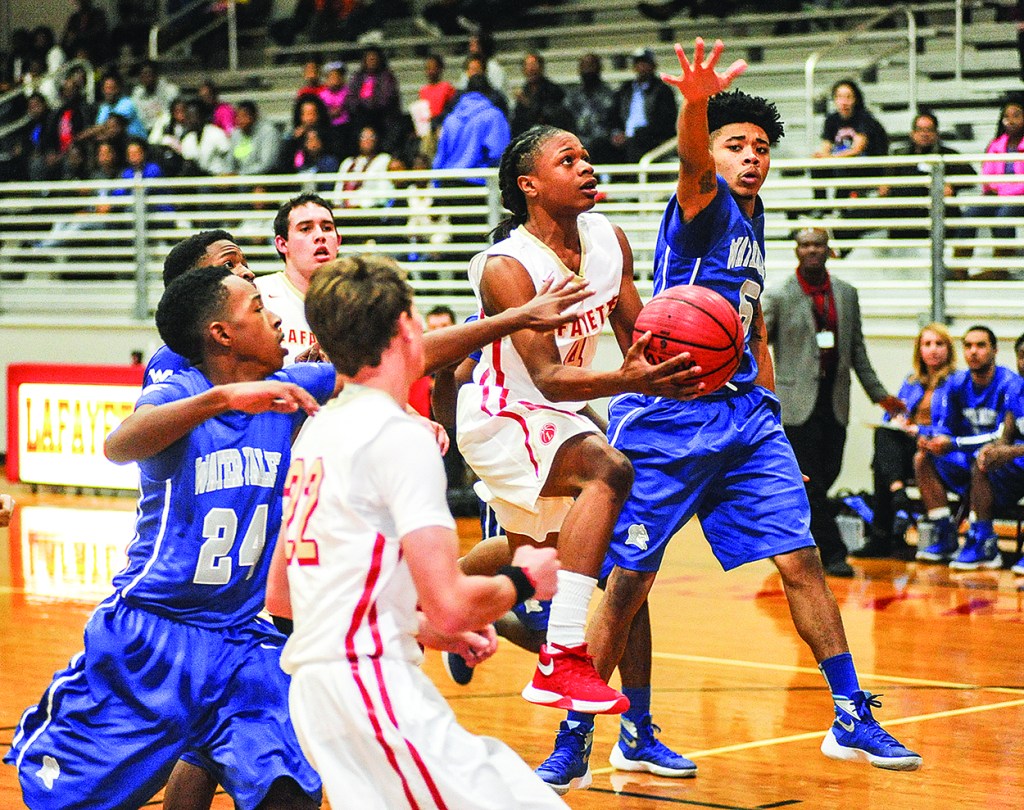 For the first time since he moved to Lafayette, John Sherman faced his former team.

There was a little bit of nostalgia, but once the whistle blew, there was only one thing on his mind — beat the opponent.

His new team did just that as the Commodores defeated Water Valley 74-43 inside the LHS gym Tuesday night.

Lafayette (2-1) was in control for the duration of the contest, but the Blue Devils (1-3) used a young, pesky team to make the game feel much tighter than it was.

“It was a 13-point game at half. They were in striking distance,” Sherman said. “I coached most of them in junior high, and they’ve got some good basketball players. … They didn’t ever quit, they just kept coming and that’s why we constantly had to be on our toes and take care of the ball. They take you out of your rhythm.”

The rhythm was frantic for both teams, but the Commodores were able to stretch out a lead Water Valley was not able to come back from.

A lot of the credit goes to Lafayette’s Chris Long. The sophomore post player loomed over some of the Blue Devils’ players, and Lafayette took advantage early. Long scored a team-high 12 points, tying with Xxavier Hill.

“If he stays within himself, he’s a big presence in the post,” Sherman said of Long. “We found him, that’s the best thing about it. A lot of these guys, they don’t want to look inside or haven’t looked inside and so we constantly say let’s look inside first then let things happen from there.”

Water Valley fought to stay in touch with a bigger, faster opponent, and coach Larry Taylor liked what he saw from his squad regardless of the score.

Jack Pritchard and De Pomerlee led the Blue Devils with 11 points each.

“It’s a young group, a lot of ninth-graders,” Taylor said. “Just trying to find a way to develop confidence and develop a format for a system we continue to build on.”

Lady ‘Dores dominate
Before Lafayette girls coach Shayne Linzy made his first substitution, the Commodores had a nearly 20-point lead.

It did not get any better for Water Valley, falling to Lafayette 48-21.

Water Valley (2-2) outscored the Commodores (4-1) 20-17 in the second half, but a 31-1 halftime lead proved insurmountable. That would be due to the pesky defense Linzy’s team instituted all night, jumping into passing lanes and knocking balls out of Water Valley players’ hands.

“(Defense is) something we’ve got to make a huge part of our game,” Linzy said. “Until some other areas offensively develop, which they are developing, we’re a lot further ahead defensively. That’s got to be our trademark.”

“We were slow with our passes and had a hard time. When we did get a shot, they wouldn’t fall in,” Water Valley coach Jason Purdy said. “We just didn’t have the speed to keep up with them.”