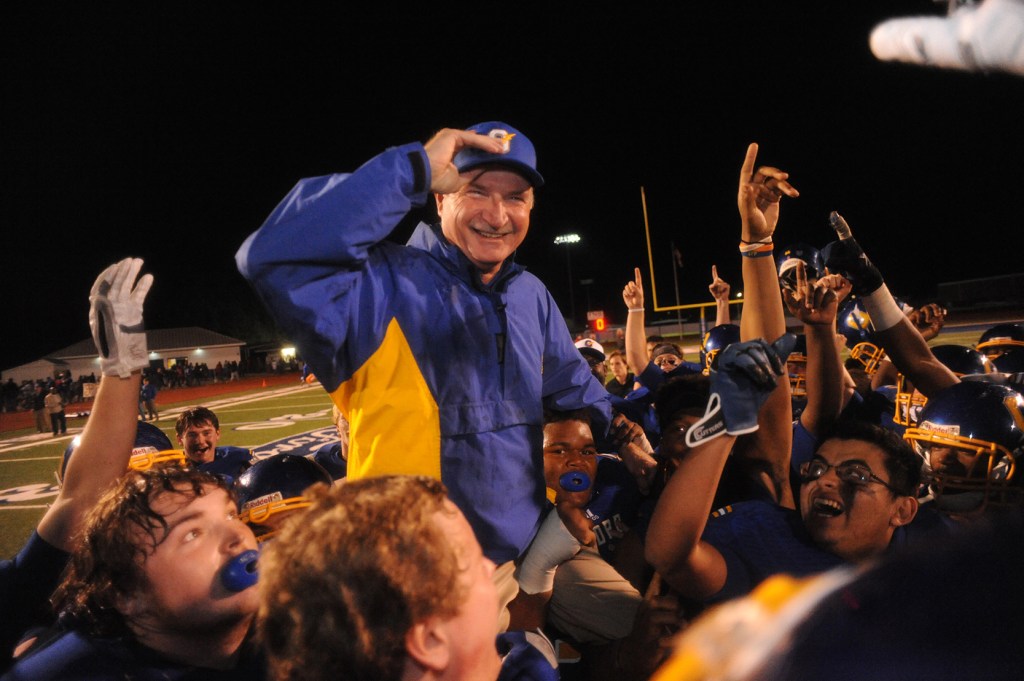 Oxford High vs. West Point in the MHSAA Class 5A North Half playoff in Oxford, Miss. on Friday, November 27, 2015. Oxford won to advance to the state championship game against Wayne County, which will be played at Vaught-Hemingway Stadium.

The end is drawing near for Johnny Hill.

Oxford’s coach will pace the sideline for the final time when the Chargers try for the third straight year to win their first-ever state championship against Wayne County on Saturday in the MHSAA Class 5A title game at Ole Miss’ Vaught-Hemingway Stadium.

For a team that doesn’t need much motivation after finishing second each of the last two seasons, it’s added incentive.

“Hopefully we’ll send our seniors out and coach Hill out with a state championship,” tight end Zach Cousar said.

Hill would like that, too, calling the thought of finally bringing a state title to Oxford “a storybook ending” to a 40-year coaching career. But the veteran coach also made it clear that any personal enjoyment that would come with one more win will take a back seat to the jubilation felt for a group of players, a program and a community that have been used to winning big yet still long to win the big one.

“Because the thing is,” Hill said, “as a coach, you do this for the kids, and you don’t want to let them kids down. That’s the biggest thing, and that’s the reason we work. I got to bed at 1:00 (Sunday) night watching film and I’ll probably get to bed at 1:00 (Monday night) watching film just to be certain there’s no stone unturned so we can figure out how to beat these guys.”

The long hours, like most weeks this time of year, have kept Hill’s mind occupied, never allowing the reality to set in that this is it. “We’re just trying to win a ballgame,” he said.

Wayne County is giving Hill and his staff plenty to think about.

Hill’s most vivid memory of that one was the way Wayne County star and former Ole Miss defensive tackle Jerrell Powe dominated the Chargers’ offensive front and disrupted everything the Chargers tried to do. Oxford finished with less than 150 yards in the loss.

More of the same
The War Eagles have another future Rebel in the middle of their line this year in Ole Miss commit Benito Jones, the state’s top-ranked defensive tackle, and a speedy complement on the edge in Tyree Evans. The pair will be the biggest test this season for Oxford’s offensive line, Hill said, and are more than capable of throwing off the timing of quarterback Jack Abraham and the Chargers’ high-octane offense if the group doesn’t hold its own.

“I’ve never seen two get off the ball quicker than these two,” Hill said of Jones and Evans. “It’s really amazing. It’s like they jump offside and don’t get caught. They’re that quick.”

But Wayne County coach Todd Mangum, who was the War Eagles’ defensive coordinator in the teams’ meeting 12 years ago, knows Hill, and he expects the Chargers to be ready for whatever his team throws at them.

“Being coach Hill’s last game is incentive enough,” Mangum said. “They’re going to come out and be ready to play just like they always are because once the game starts, all that stuff is over. Once the whistle blows, it’s football, and they’re going to be prepared.”

And once the final whistle is blown, Hill is hoping he’s the coach who finally gets to hand the gold ball over to the ones who would be most responsible for making that dream ending a reality.

“You can lose (a game) as a coach, but you’re not going to win it,” Hill said. “The players win the ballgame. No matter what you call or what you do, they’ve got to execute it. Really this ain’t got nothing to do about me. It’s all about those kids.”