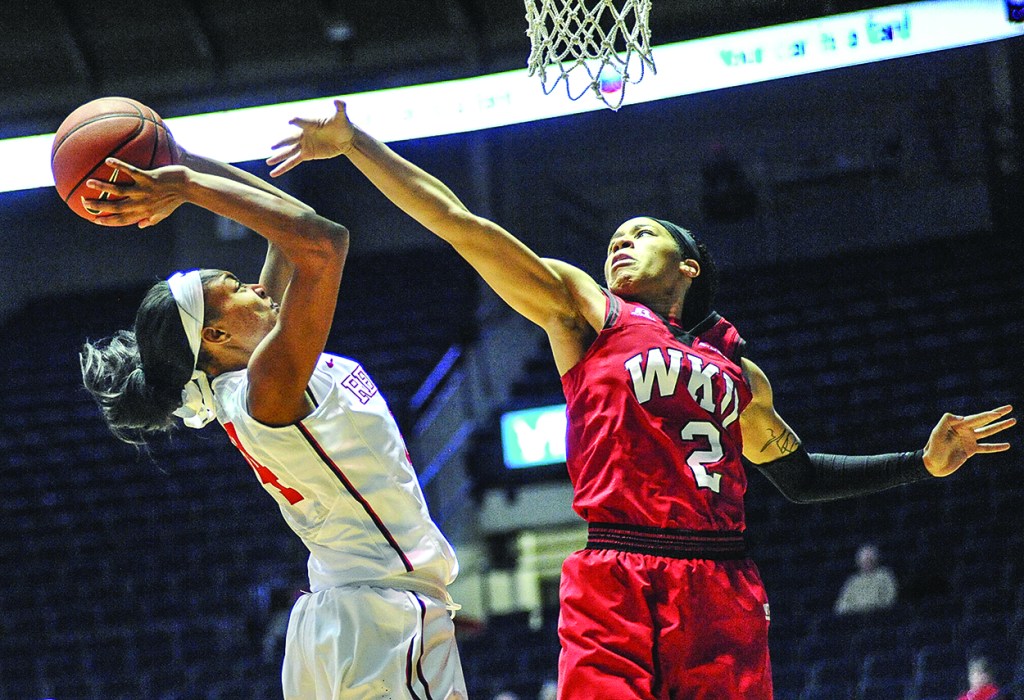 The weather is getting colder outside, and for portion of Wednesday’s game between the Ole Miss women’s basketball team and Western Kentucky, so was the offense.

After a slow start, the Rebels found their rhythm, holding off a pesky Western Kentucky team for a 59-53 victory inside C.M. “Tad” Smith Coliseum.

It was Ole Miss’ third straight win after sweeping a pair of games during a New York road trip last weekend.

“What a great win for our program,” Ole Miss coach Matt Insell said. “Western Kentucky is a really good basketball team. We didn’t play our best, we did not. But the one thing, I’ll tell you what we did, we played together as a team and they fought every possession.”

There was not much for either team to write home about after the first quarter ended, shooting 2 of 20 combined to end the quarter and a 13-10 lead for the Rebels (4-3).

Things heated up for Ole Miss in the second quarter when sophomore guard Shandricka Sessom began to find the basket. Sessom had 11 points in the first half with six of them coming on back-to-back 3-pointers. It was part of a 9-2 run that included a 3 from freshman Alissa Alston, giving the Rebels a 25-19 lead at the time.

Sessom finished with a team-high 18 points but missed a lot of the second half after earning her fourth foul with more than six minutes left in the third quarter.

With the top scoring option sitting on the bench, Oxford native Erika Sisk took over, becoming the leader on the court for the Rebels.

Sisk scored 16 points with 11 of them coming in the final two periods. Her biggest contribution came from the free-throw line where she made 5 of 8. With the Hilltoppers (3-2) within two points, Sisk scored four of the Rebels’ final eight points from the charity stripe, sealing the win.

The free-throw line has been kind to Ole Miss in the early part of the season, shooting 57.5 percent. On Wednesday, the Rebels shot 48 percent, making 13 of 27 attempts.

“We saw the free-throw percentage, but it’s going to get better,” Sisk said. “I did make the big ones. I should’ve made the other three, should’ve been 8 of 8.”

“It’s very hard to do what we just did,” Insell said. “Win a game missing that many free throws, missing that many layups. That’s something that we’ll get fixed. We just had an off night, but what good teams have to do is you have to figure out a way to win even when you play bad.”

Help from a legend
The Rebels began this three-game winning streak during their Thanksgiving trip to the Empire State and something special happened along the way.

With the help of someone he calls a mentor, Insell found a way for the Rebels to practice at Terminal 23. It is a private gym located in downtown New York City owned by Michael Jordan, and access ranges from exclusive to none.

Ole Miss found their way into “His Airness’’ gym, and it galvanized a team that was searching for anything to help them after a 1-3 start to the year.

“I saw a turn in our team there,” Insell said. “They were in awe when the walked in. It was an awe moment. They started coming together. We had a rough practice. It was hot in there. It wasn’t fun in there because it was so hot, and for the last 20 minutes, we just scrimmaged and got after each other. From that point forward, our team has changed. We left Terminal 23, and we had changed.