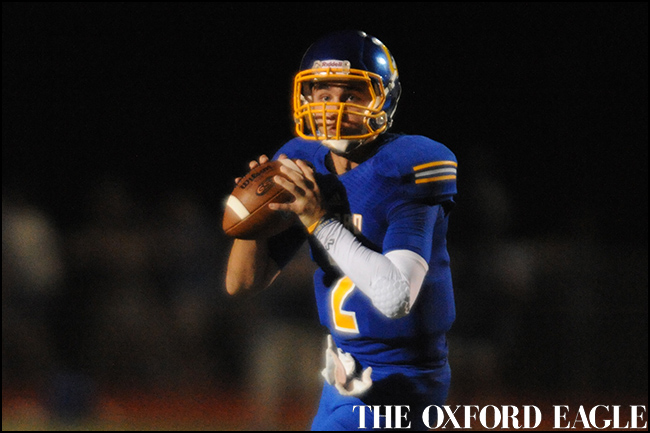 Before Jack Abraham tries to help Oxford make history this weekend, the Chargers’ senior quarterback made some of his own Thursday.

Abraham was named the Gatorade Football Player of the Year in Mississippi for the 2015-2016 season, becoming the first Oxford football player to ever win the award. Abraham, who’s verbally committed to Tulane, has put together the best season in school history for a quarterback and will try to cap it with the Chargers’ first-ever state championship when Oxford meets Wayne County in the MHSAA Class 5A title game on Saturday at Ole Miss’ Vaught-Hemingway Stadium.

In his third and final season as the Chargers’ starting signal caller, the 6-foot, 195-pound Abraham is completing a career-best 65.6 percent of his passes and has set single-season school records for passing yards (4,541) and touchdown passes (53) while throwing just five interceptions. The numbers surpass what Abraham did in his first season at the controls of Oxford’s offense as a sophomore in 2013 when he threw for 3,572 yards and 38 touchdowns.

Abraham, who’s averaging 15.3 yards a completion, has tossed at least three touchdowns in all but two games this season and threw for a season-high seven touchdowns in a 46-12 win at New Hope on Oct. 16. He’s thrown for 1,016 yards and 10 scores in the Chargers’ first three playoff games, including the game-winner in the final minute to help Oxford get past Germantown, 40-33, in the state quarterfinals.

Abraham and the rest of the Chargers are playing for the 5A title for the third straight year after falling to Picayune in 2013 and Laurel last season.