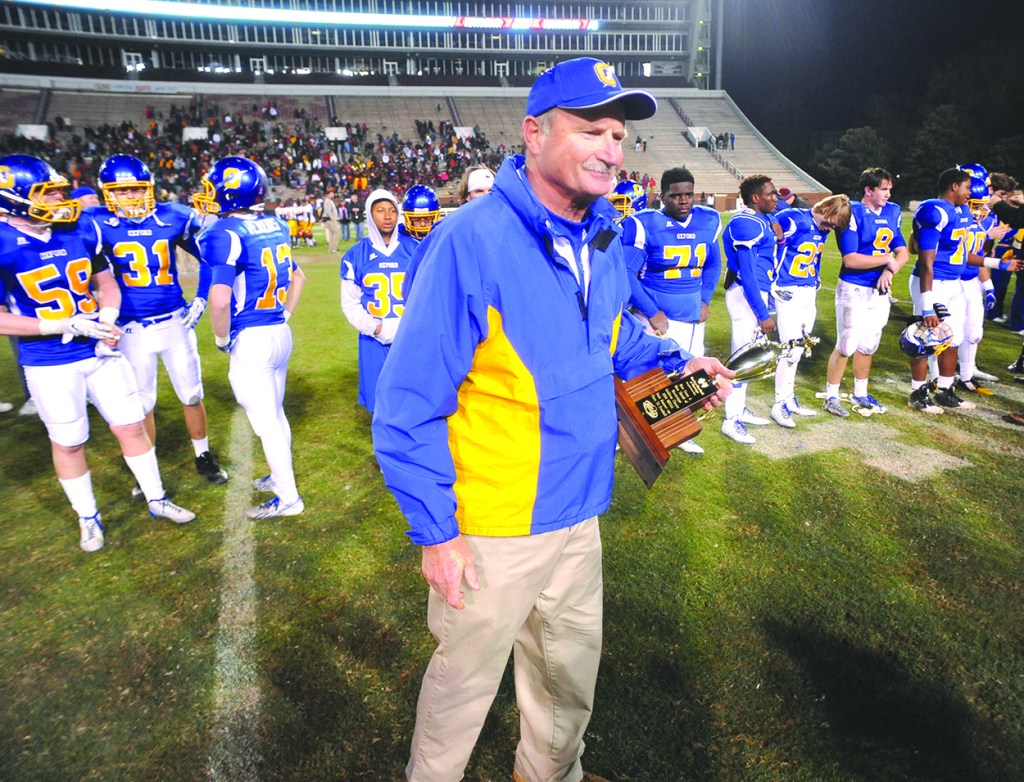 Oxford is on the brink yet again.

The Chargers are 48 minutes away from their first-ever state championship in football. For the third straight year, they’re that close after coming up short against Picayune in 2013 and Laurel last December.

This time, it’s Wayne County that’s standing in Oxford’s way of history. The teams will go at it Saturday at 7 p.m. in the MHSAA Class 5A state championship just a few miles from Oxford’s campus at Ole Miss’ Vaught-Hemingway Stadium.

And the Chargers want to feel something other than bitter disappointment once they’re done.

“You work so hard to win it, and then you just get in there and see another team hold the trophy, it makes you want to work that much harder coming into the next season,” Oxford tight end Zach Cousar said.

In order for Cousar and the rest of the Chargers’ seniors to claim that elusive gold ball in their final go-around — and send head coach Johnny Hill out on top along with them — Oxford (12-2) will have to get past a Wayne County squad that’s equally as hot. Oxford has won 11 straight since dropping back-to-back games to Starkville and Madison Central while the War Eagles (11-3) have won nine of their last 10, including a 55-27 demolition of Laurel last week to get here.

“This has been something that has evaded Oxford, and it would be great to do that,” Hill said. “Whether we do it this year or it’s done down the road … hopefully we can relax and play our game a little bit more this time than we did last time, just have fun and get it done.”

Oxford will put its high-powered offense against Wayne County’s stingy defense with plenty of star power to go around.

There’s also Hiram Wadlington, who has three 100-yard outings in his last four games since taking over as Oxford’s running back midway through the season. The speedy sophomore is an option for Abraham out of the backfield, too, with 447 receiving yards, fifth-most on the team.

“You can’t load up for one guy,” Wayne County coach Todd Mangum said, “because if you do, someone else is going to beat you.”

The War Eagles will try to counter with a pass rush featuring the quickest line tandem Hill said he’s ever seen in his 40-year career in seniors Benito Jones and Tyree Evans. Jones, an Ole Miss commit, has 76 tackles and a team-high six sacks from his tackle spot while Evans has racked up 77 stops and four sacks.

“If we can block them, we feel like we can put some points on them,” Hill said. “But it’s blocking them. They’re tough now. We’ll have to figure out some scheme to block them where we can run and throw on them.

“I’ve never seen one guy, much less two of them on the same team that come off the ball so quickly.”

Oxford will also need to contain Wayne County’s quarterback, Reggie Stewart, when the War Eagles have the ball. The 5-foot-9 Stewart has accounted for 2,770 yards of offense and is Wayne County’s third-leading rusher, reminding Hill of another dual-threat signal caller the Chargers have already seen in Center Hill’s Danterius Ellington, who piled up 380 total yards in Oxford’s 54-30 win on Oct. 30.

“(Stewart) is not very big, but he’s fast and real quick. He’s good athlete,” Hill said. “He played receiver last year and can still throw it. He’s completed over 50 percent of his passes.”

All that’s left to do now is find out which side is better.