The week before Thanksgiving two Water Valley police officers were able to help a family in need on a very cold night.

Officers Justin Mayer and Austin Tallent were working the late shift when a homeless couple stopped by the police department in need of shelter from the freezing weather.

“When they walked into the office that night I saw the look in their face and knew they needed help,” Tallent said.

The man wore a thin jacket and pants while the woman with him was wearing only a long-sleeved T-shirt and pants. She was so cold she had her arms tucked inside the shirt to stay warm.

“It was that week that it started getting really cold out,” Mayer said.

Both officers were familiar with the couple on a friendly basis and knew their situation. The past couple of nights the couple had stayed various places to keep warm, but had ran out of places to go.

Mayer said the man normally talked when he saw the cops, but when he walked in he was quiet, so they both knew something was wrong.

The officers took turns calling different shelters, but the shelters were either closed or were not able to be reached because of the time of night.

Tallent said he and his partner decided to do what they knew was right.“I pulled into the motel parking lot in town, I got out, went inside and told the man at the desk ‘I need the biggest bed you have for the weekend,’” Tallent said.

The officers paid for the room for the weekend until the cold weather moved on.

“I opened their room door and their eyes got really big,” Tallent said. “I told them ‘This is yours for the weekend.’”

Tallent said there were a lot of things he could have bought with the money he spent. But he knew that warm bed meant more than anything else in the world to that couple.

Mayer said sometimes being a cop feels despairing at times because he and other officers are constantly exposed to the negative aspects of every situation.

Mayer started in law enforcement in Oxford while he was in college. He joined because he wanted to give back to the area.

Tallent has been on the force since January. He decided to become a police officer in order to serve and protect his community as well as give back to the people in need.

“We really try to make a difference in the community,” Mayer said. “There are not enough people to stand up for stuff. I figure if I’m willing to do it, why not do it?” 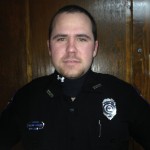 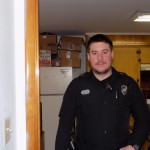