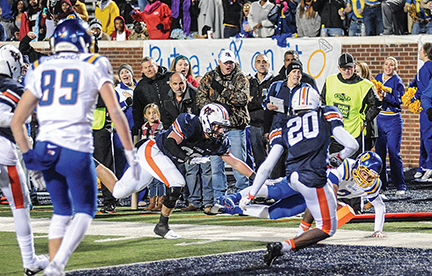 Oxford quarterback Jack Abraham (2) is tackled just short of the goal line by Wayne County’s Tyler Hopkins (30) in the MHSAA Class 5A championship game at Vaught-Hemingway Stadium on Saturday. The Chargers fell, 45-41.

Oxford lost its lead late in Saturday’s MHSAA Class 5A state title bout against Wayne County, but with the back-and-forth nature of the game, the Chargers liked their chances of reclaiming it and keeping it for good.

Oxford got oh so close.

After the War Eagles went the unconventional route to score their last touchdown for a 45-41 lead — a 9-yard pass from Reggie Stewart to 6-foot-3, 295-pound defensive tackle Benito Jones with 1:17 left — Oxford had the ball last and drove 53 yards on nine plays to set up a second-and-goal from Wayne County’s 10-yard line following a spike with 11 seconds left.

Quarterback Jack Abraham scrambled to the 1 but stretched the ball to hit the pylon on his way out of bounds. Officials ruled Abraham stepped out short, and with 4 ticks left, wideout D.K. Metcalf got the handoff and tried to beat the War Eagles’ defense to the perimeter.

Metcalf stretched out his 6-3 frame as he fell to the turf, but the referees again ruled Metcalf short as time expired, sending Wayne County’s players and coaches rushing onto the field in jubilation while leaving the Chargers in shock.

“(Abraham) was in,” Oxford coach Johnny Hill said. “You look at it on film, but evidently he wasn’t. And I thought D.K. was in, but that’s neither here nor there.”

It was a frenetic finish to a game that featured 1,164 yards of offense but left the Chargers still seeking their first-ever state title after three straight trips to the championship game.

“I hated it for the seniors last year and the year before that,” Hill said. “It’s tough to lose it three years in a row. But our kids played hard. They have nothing to be ashamed about.”

The offensive explosion was spread throughout both teams as four players each accounted for at least 100 total yards.

Wayne County running back Freddy Jordan led all players with 339 all-purpose yards, rushing for 193 and finishing with 146 receiving and three total touchdowns.

Oxford’s Hiram Wadlington had 198 yards receiving and 75 more on the ground while accounting for three touchdowns. Metcalf caught 11 passes for 148 yards and two scores while fellow wideout Ken Presley caught 98 yards worth of passes and added 16 return yards to finish with 114.

Abraham and Stewart combined to throw for 823 yards and eight touchdowns.

Abraham completed 35 of his 52 passes for 550 yards and four touchdowns, setting a new school single-game passing record. The 6-foot senior broke his own record set on Sept. 4 against Madison Central when he threw for 479 yards.

Abraham finished his career with 11,967 passing yards and 130 passing touchdowns. 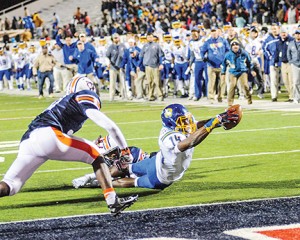 Bruce Newman
Oxford’s DK Metclaf (14) is stopped just short of the goal line as time expires by Wayne County’s ZaBryon Jackson (11) in the MHSAA Class 5A championship game at Vaught-Hemingway Stadium on Saturday. The Chargers, playing in their third straight state finals, fell 45-41 to the War Eagles.