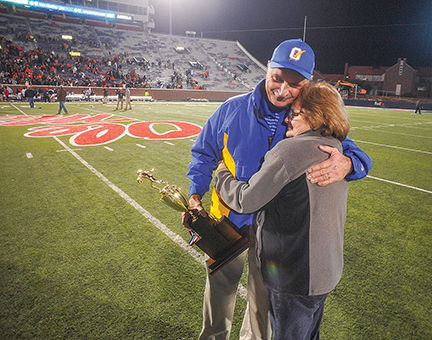 Bruce Newman Oxford head coach Johnny Hill, left, hugs his wife Linda following the Chargers loss to Wayne County in the MHSAA Class 5A championship game at Vaught-Hemingway on Saturday. It was Hill’s final game as head coach of the Chargers, who were playing in their third straight state championship game. For more on the game, see today’s Sports section.

The nightmare continues for Oxford, which is still in search of its first state championship in football.

The Chargers felt Saturday night inside Vaught-Hemingway Stadium was going to be their night, but an Ole Miss commit had other ideas.

Wayne County defensive tackle Benito Jones scored on a 9-yard pass from quarterback Reggie Stewart with 1:17 left in the game.

It was enough for the War Eagles to claim the MHSAA Class 5A state championship with a 45-41 win over Oxford.

The Chargers had one last chance to snatch the golden football away from Wayne County’s hands, but on third-and-goal with 4 seconds left, wide receiver D.K. Metcalf was brought down inside the Wayne County 1-yard as time expired, denying Oxford for the third consecutive year.

“(Wayne County) made some good plays, we made some good plays,” Oxford coach Johnny Hill, who coached his final game, said afterwards. “I thought we were in twice down there, but that’s the (referees’) call. I’m awful proud of this team. I would have liked to won it for Oxford and this whole community and everybody that played for Oxford, but it just wasn’t our night.”

For the majority of the game, Oxford led Wayne County, controlling the scoreboard. The Chargers did it their way — with a lot of offense.

Wayne County struck first, using a three-play, 76-yard scoring drive capped by a 74-yard pass from Stewart to running back Freddy Jordan for the early 7-0 lead.

Oxford took advantage of a short field, and Hiram Wadlington ran in from 4 yards away to tie things up 7-7 a little less than three minutes later. Wayne County responded with a 29-yard field goal to take a 10-7 lead.

As has been their calling card all season, the Chargers used two explosive plays to shoot ahead of the War Eagles, taking a 21-10 lead.

The first was a 71-yard, one-play drive that involved Ole Miss commit and Oxford wide receiver D.K. Metcalf when he ran 71 yards on a bubble screen. Wadlington scored his second touchdown of the half with a 92-yard screen pass from Abraham.

Once the first 12 minutes of the game expired, Oxford had recorded 264 yards of offense and four touchdowns. Running back Josh Patton accounted for the final score of the quarter with a 2-yard run with 10 seconds left.

“They have nothing to hang their head down about,” Hill said of his team. “They played their butts off.”

Abraham finished his final game in an Oxford uniform completing 35-of-42 passes for 550 yards, four touchdowns and one interception. The 550 yards was a new career single-game record for Abraham, shattering his own record of 479 he set against Madison Central earlier this season.

The senior quarterback had a chance to win the game with his legs, but a 9-yard scamper fell a yard short, resulting in the ensuing Metcalf play.

Stewart went 13 of 26 for 273 yards, four touchdowns and two interceptions, but it was his final pass to Jones that had the most impact for Wayne County.

The War Eagles erased a 41-31 deficit by scoring the game’s final 14 points in a seven-minute span.

D.Q. Thomas and Tias Hillard accounted for Oxford’s two interceptions, both coming in the first quarter.